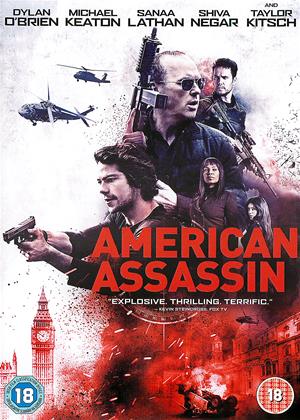 Awful. I want my 100 minutes back. - American Assassin review by MC

I gave this awful film the benefit of the doubt, thanks to the reviews here which were way off, in my opinion. Just the most derivative, asinine, juvenile, intelligence insulting script with the emotional sophistication of a thirteen year old boy. The finale is on a par with Angels and Demons when it comes to the most laughably facile, not-at-all-thought-through ending. A wafer thin, ludicrous plot coupled with cringe-inducing script and the kind of voyeuristic, lecherous direction one would expect of Michael Bay or Zak Snyder. If you enjoy their films then have at it; everyone else, avoid like the plague.

Contrary to the Cinema Paradiso review, this is actually a really good film, that just gets better the more it develops! The beginning sequence of Muslim Terrorists killing innocent holidaymakers on a beach is accurate, contrary to what the CP reviewer asks, because it reflects actual events. The film then develops along a very familiar storyline of revenge, but then develops into something much more complex. Perhaps some will see this as being very un PC, with Iran wanting to start a war with Israel, in other words Muslims vs Jews, but it is again a very accurate reflection of what has been happening in the world of late and it is this which I feel may be the cause of criticism in some quarters! Why indeed do some people resort to terrorism and target innocents on a beach, this film provides no answers, but does touch on some very raw nerves whilst attempting to address the issue. There are very strong elements of Bond and Jason Bourne here, with slick action sequences, lots of fights, big bangs and explosions, car chases etc, all the standard fair to make up a good action movie. So whilst the storyline itself is nothing new, it's all been done before, the acting, direction, editing all make up for this and the action finale is entertaining and gripping. Perhaps for some this film may be a little too close to home, telling some home truths and exploring some uncomfortable issues, but I personally feel that it manages to tackle some real life issues whilst at the same time not being too deep to come across as preachy. You can either see the message behind it all or not, but ether way this is a really well made, slick action movie, well worth a watch and much better than many of the big blockbusters out there at the moment!

I will keep this short and simple. If you take out the violence (which is very well done) this is a children's film. Cliche driven rubbish.

After seeing his partner gunned down by terrorists our hero joins the CIA and gets trained for black ops. There’s nothing new here but ex-Homeland director Michael Cuesta directs with good pace and captures the action with a smooth prowling camera. There’s a country-hopping plot, a worthy baddie (ex-CIA agent ‘Ghost’) and a satisfyingly silly and exciting Bond-like set-piece climax. The Cinema Paradiso review reverts to an unmerited politicised criticism, but if you like action films in the Taken mode this hits the spot.

This is an excellent thriller,has an excellent cast and worthwhile story.Fight scenes are realistic and well choreographed. The best of its genre i have watched since Taken and the Bourne films.

Lot of attempts to equal the Bourne films. This is pretty good of the genre. Bit more roadrunner/Segal orientated. Slightly less believable than the simpler Bournes, as so many dead bodies strewn about at individual shoot outs. Death toll mounts. Apart from American schools, and Turkey etc, never get such cowboy events in reality.

Danger that the violence becomes necessary, and is over-portrayed. Not quite realistic..........in a way so gory as to be OK, as is not accurate....... so in a bizarre way can be handled on a surreal plane.

Author Vince Flynn must have an amazing writing style. I’ve never read any of his books, but they seem to have a massive following for there to be so much buzz around adapting his novels for the big screen. So why is it just a standard thriller with typical terrorists and an average nuke plot? The director must have realized this story was too simple as well as he tries to turn up the volume on the violence, the grit and the brewing racism for Muslims. In doing so, this type of story goes from average to dumb to chaotically ugly with its real-world related violence and stupid characters.

The predictable plot begins right from the first scene. Mitch (Dylan O'Brien) has just proposed to his girlfriend on the beach while video taping the event in front of a crowd. To celebrate, he goes to get her a drink from the bar, waving towards her as he is ordering. It doesn’t take a genius to know she is going to end up dead. I was thinking it’d be a shark attack or a boating accident. Instead, it’s a terrorist attack...at the beach. A group of terrorists on boats disembark to shoot up every innocent civilian...at the beach. Um, why? This is never answered. As with everything in the film, it’s an excuse for violence. Mitch is injured in the incident and watches while his girlfriend is shot in the face in front of him by those evil Muslim terrorists. AT THE BEACH! I would love to hear the reasoning about how Isis hates beaches.

Months later, Mitch is consumed with revenge and turns into a massive jerk. He causes fights at the gym and is kicked out. He shoots other people’s targets at a shooting range and is kicked out. He throws knives in his apartment and is very close to being kicked out. His current mission is to infiltrate a sect of Muslim terrorists so that he can join their ranks and kill the leader who instigated the beach massacre. But when he finally gets far enough into Muslim terrorist territory to kill this man, the CIA bursts his bubble by killing the bastard for him. The movie is over, right? He has no need to keep fighting and should work on not being a social outcast for being filled with rage. But, no, the CIA likes his style and want to hire him because I guess they’re running low on psychopaths in the organization.

Mitch is trained by Hurley (Michael Keaton), an insane CIA veteran of the Cold War that specializes in training the ultimate agents. His course includes such classes as where to shove a knife, a virtual reality shooting course, spot the terrorist in an IKEA and coming to terms with your dead girlfriend. Hurley telegraphs everything that will happen in the mission. He says to never let things get personal in the field. Everything gets personal for these agents, including Hurley. By the film’s own logic, these agents suck, as the plot is entirely reliant on their stupid actions to keep the tension going. Hurley tells Mitch to not pursue the enemy when their position is comprised. He pursues anyway. Hurley is told not to go after the terrorists on his own. He does anyway. Even the Turkish agent of Annika makes one of the most idiotic displays of emotion on the field, compromising her position and forcing her into a suicide maneuver.

There is so much stupidity on display that I questioned why so much of the devoted fans took this story seriously. Mitch’s revenge-obsessed nature is rarely addressed and it seems as though he may have some brewing racism for constantly seeing the face of the Muslim terrorist that killed his girlfriend on every Arab, Turk and Russian he meets. If Mitch is still hallucinating this guy after he is long dead, the CIA may want to do a more extensive psychological test on this guy. The villain is a former Navy officer by the name of Ghost, played by Taylor Kitsch with a bafflingly bad Southern accent in between speaking the language of Iranians. The ending involves a nuke going off in the ocean, reasoning that it needs to be thrown deep enough into the ocean to avoid the radiation it would cause if it went off above water. Not only does the thriller temporarily turn into a disaster picture when it goes off, but nobody seems to be concerned about the massive tidal waves or radiation such a blast would cause within the water. Michael Bay rules, I suppose.

I wanted to go along with the film as a dopey thriller and pass it off as an average Jason Bourne copycat film, but it’s made all the more vulgar with its focus on real-world events. There is no reason for the terrorists to shoot up the beach except to remind us of all the other terrorist attacks where innocent people were shot dead. That scene is followed by an Isis training video showcasing footage of dead Muslims to justify their war against the Americans. Mitch’s vile nature of despising Muslims and everyone around him is never once addressed, reasoning he’d be the perfect killing machine for the war on terror. And the action scenes are overblown with gruesome violence, featuring sliced flesh, broken limbs and fingernails ripped off with pliers.

While I left the screening, I heard a group of older men and women in their 50s talking about how exciting and educational the film was for being reflective of the times. I felt disgusted that something this glib and dubious was considered entertainment in this day and age. What did we really learn from this film? How crazy can Navy soldiers go to build nukes? How we can’t trust anyone brown, including the CIA Turkish agent which, surprise, is working for the enemy? How the CIA needs more people who disobey orders and bite off ears? I learned more from watching the audience for what passes as entertainment these days.