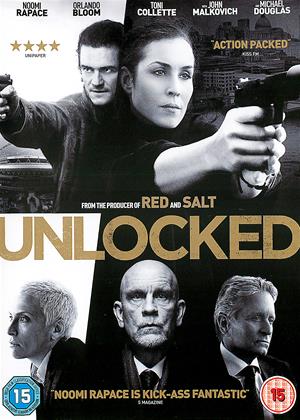 Deadpan and dangerous - Unlocked review by AS

Amid a clutch of well-knowns - Douglas, Malkovitch, Collette, Bloom - Noomi Rapace is the standout as she kicks, punches, stabs and shoots her way through the tortuous plot with nary a hint of emotion invading her face (of course, this may or may not have been acting). Don't look aside for one moment or you'll be lost forever in the maze of blind alleys and double crossings. Almost unique in a genre infamous for its holey plots and loose ends, the storyline is kept leak-free and all threads deftly gathered by writer Peter O'Brien. No surprise that direction is razor-sharp by Michael Apted (Gorky Park, Enigma, The World Is Not Enough). It won't come as any surprise if Ms Rapace returns to mete out further measures of mayhem in the near future.

I love spy thrillers, and this one beat all before it. Cast of characters are played excellently by the stars themselves, all perfectly cast, in my opinion.

If you love/like spy films with plenty of action, this is a must see. 10/10

I would love a Unlocked 2 please Mr Director.

Apart from J M is a bit similar to loads of other offerings. Not quite credible here and there, and a bit near the knuckle with the terrorist input, but is there to be used i suppose, even in the name of entertainment.

If you could think of all the current plots in this genre and put them in one over complicated film , this would be it. Not so much a thriller more like a puzzle.

Twisting, fast-moving spy thriller about a plot to release a biological weapon in London. Noomi Rapace is the CIA agent caught up in one scrape after another as the bodies pile up. Smoothly directed by experienced hand Michael Apted, the film plays like a 70s thriller (Three Days of the Condor, Marathon Man). It’s constantly intriguing and its plentiful action scenes are deliberately and mercifully free of OTT rapid-editing and frenzied in-your-face camerawork.

At times, like 24 on speed, it’s too densely plotted for its 94min run time, and it does lack oomph in places, which is perhaps why critics found it underwhelming on the big screen. Or maybe they just saw the suspense-killing tell-all trailer first. Moral for modern times: stay away from trailers. If you’re looking for an intelligent high-class

A complicated plot might make it too much effort for some but it moves along at a cracking pace with plenty of twists and turns and plenty of action. I'm not from the cinematic comic book generation, neither am I some doe eyed teenage girl, this is how I like my films to be!

I amazed that some reviews of this film are positive. Its an awful badly acted, by a comiclly bad noomi rapace, cliched turgid "thrllier" that oddly has a 5 star cast. They must have needed the money! Its ridiculously over complicated and brings nothing to the genre. For fans of noomi rapace only.