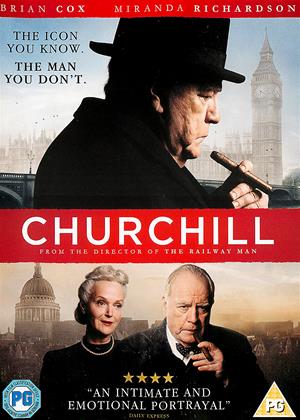 If this film is to be believed Churchill was nothing more than an incompetent, cantankerous idiot who got in the way of the war effort.

The film is pure fantasy. It may be asking us to think about the pressures and sacrifices of being the Prime Minister during this period of time but it's simply too inaccurate to take seriously.

The film tries to suggest that Churchill was not made aware of any of the plans for D-Day until a few days before hand! When we know he was involved months if not years before the event. It also paints the Allied High-Command as being ignorant of the German forces on the other side of the channel when in fact our spies and the French Resistance had spent years convincing the German High-Command we were going to land at Calais. The film also conveniently forgets about the role of Bletchley Park in feeding Churchill and the Allied High-Command information about German strength along the coastline.

There is so much wrong with this film that it is hard to know where to begin. Spiteful caricatures of the Allied High Command before D-Day liberally dosed with anachronisms and banalities make this a film to be deplored. The scripting is trite and the acting about as good as one might expect from a bunch of sixth formers. If one wants a better picture of what Churchill was like in 1944 the reader could do no better than to read the diaries of Lord Alan Brooke who is surprisingly open about Churchill and the High Command. There are better films out there, this one should be avoided.

To give some balance to the reviews posted here, my wife and I found the performance by Brian Cox to be compelling, and the cinematography to be beautiful and authentic. If you put the historical accuracy to one side, the movie licks along with some tension and we did not resent the time spent watching it.

Insult to a great man - Churchill review by HR

This film didnt give the best insight or portrayal of one of the greatest British men in History.

It was an ok way to spend some time when there was nothing else on the TV but cant imagine his family are best pleased with this !

Perhaps not helped that I've watched Darkest Hour and Dunkirk recently, so we expecting more than this. Acting by Brian Cox was great, I just didn't believe the story. Felt like a story was being crowbarred in where there wasn't one. Shame.

One to avoid - Churchill review by AB

Utter garbage. Typical movie making re-write of history and not in a good way. The actors should be ashamed.

Spoilt my opinion of churchill - Churchill review by SC

Churchill has always been a figure to look up to since I was a little girl (I am 72 now) and someone who saved the British nation from unspeakable horrors. We know he drank too much. He was argumentative and probably very difficult to live with, but this was the very reason we did not kow tow to Hitler in the first place. Modern people forget that there was a large movement in this county during the 1930's to do deals with Hilter and pacify him. Churchill rose above all this, and he lead this country which took tremendous courage forward. To depict him in this way, as a bumbling fool is a tremendous insult to his memory. We can imagine how he would have had trouble with sending young men to die, but he put duty above all alse.

I watched about 20 minutes of this before I was so annoyed I looked on line for reviews. It gets a panning, so I didn't even bother watching the rest. It's just people in uniforms shouting at each other. That's not a very in depth review, but it's not a very in depth film. Why would anyone even make a film like this, it's not historically accurate or remotely entertaining, surely a historical drama needs to be at least one of those. There must be other films people are trying to get funded that would have warranted the money wasted on this.

Haunted by the Dardanelles - Churchill review by KW

Interesting concept that in the lead up to the D Day landings Churchill was haunted buy the fiasco of the Dardanelles campaign which he championed during WW1! Other historians have always been split over his view of D Day and his continued push for projects in the Greek and Italian theatre! For me the standout acting performance was Miranda Richardson as Clementine Churchill!

I truly feel sorry for Brian Cox. He is such an accomplished supporting actor and really deserves a lot of credit. Here he is handed a very meaty role of playing Winston Churchill, a historical figure perfectly suited for his gruff and grump old-man persona. It’s unfortunate that this performance had to come out during the same year as The Darkest Hour, the film where Gary Oldman delivered the performance of his career by escaping entirely into the role of Churchill. Overshadowed, Cox may be overlooked when he really should be given some credit for putting forth such an amazing effort. But, much like Oldman’s film, Churchill is entirely dependent on Cox to hold the fort and he’s only one man who can only do so much.

I’m surprised that Cox didn’t just decide to pull this performance off as a stage production considering the entire film has him shuffling around, bickering and feuding on the road to D-Day. And yet the film feels highly limited to the extent it wants to cover with Churchill. We mostly see the man either muttering to himself, shouting down others, and slipping into depression. All of this is well within the range of Cox’s acting expertise and it’s pretty impressive to watch him stroll easily down these paths for portraying the iconic man.

But the film seems to have too much faith in Cox’s performance to hold it up. As a result, the film becomes somewhat muddled with staging history in order to grant more creative license for Cox to shine. In this essence, the film becomes troublesome to feel more like it is being Churchill written for Cox than Cox written for Churchill. Such stirred story elements of the man feeling like he was in a mental battle of worrying about casualties, communicated through a scene of a beach with waves of blood, comes off as making Churchill seem almost too human, as though he were a pathetic politician struggling to make his voice heard. He dwells on the troubles of World War I almost as much as the film dwells on his character's flaws as opposed to his politics.

I really don’t want to compare Churchill to the likes of The Darkest Mind but what choice do I have here? Can anyone really distance themselves considering how well The Darkest Hour took aim at the political sensations that coursed through Churchill’s very being? True, The Darkest Hour does take its own creative license to make the man seem more of the people than the cranky coot who made tough calls. But where that film soared at its best was conceiving an attitude and a drive for Churchill to plow through with courage and vigor. Here, Churchill seems far too weak and fragile, like a broken man past his prime and always terrified of the past repeating itself in his nightmares.

The film itself is worth a viewing for the performance of Cox who owns this film with all its clunky direction, historical inaccuracies, and pacing problems. But if you’re looking for a film with a much more profound perspective on Winston Churchill, The Darkest Hour has this watered down version beat.