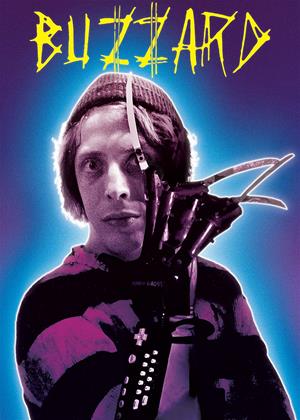 There’s a certain humor and bitterness to a film like Buzzard that takes direct aim at the next generation of slackers with a Taxi Driver vibe. It’s an uncomfortable look at today’s youth that has lost all hope for the future and all sense of morality. The character of Marty (brilliantly played by Joshua Burge) represents everything that has gone wrong with the millennials and all the ugliness they can easily slip into by taking advantage of a flawed society. But this is no in-depth analysis on the root of Marty’s evil or a resolution to his bad behaviour. He simply sinks deeper and deeper into the abyss of stealing, freeloading and attacking others. Marty is a very disturbed human being that is not a nice person to be around, but watching him from a distance makes for a fascinating character study I couldn't look away from.

While it’s hard to identify with Marty’s personality, you can at least understand his frustration working as a temp for a bank in Michigan. He’s paid very little and resorts to getting by with various tactics to cheat the system. He cancels his bank account to set up a new one that comes with a free $50 upon setup. He orders office supplies, sneaks them out of the office and sells them for profit. It’s a way of life that has become so common to him that he’ll never move up from penny-pinching and five-finger-discounting. He’s a cheat and he’ll always be a cheat. The only question is how far will he sink in his journey to evade authorities and make some cash. Marty is by no means a master of this lifestyle as he doesn’t think about the repercussions of cashing checks that don’t belong to him or squatting at a cheap motel.

But there is far more to his damaged soul than just a crummy job and lack of funds. When not at work or ripping off others, Marty spends his time isolated behind closed doors. His evening routine includes listening to heavy metal music, wearing a ridiculous devil mask and cooking a dinner that is essentially potato chips sandwiched between two pizzas. Everything about this lifestyle screams unhealthy. In between these activities, he calls up his mother on the phone to talk about money and lie about how well work is going for him. There is some sense of humility while talking with her that makes him embellish about getting a raise. He wants to be seen as a good man, but only when it strikes him in those rare moments.

The rest of the time he is lost in his own nihilistic philosophy of the “whatever” mentality. There’s a very compelling moment when he sits alone in bed eating a plate of spaghetti, noodles dripping all over him without a single care for the mess he is making. This scene progresses for an absurd amount of time until he finishes the plate, but never bores in how intriguing it is to watch a man who has no sense of dignity or manners. He just doesn’t care what anybody thinks of him, at least on the outside. Deep inside there is a tiny bit of humanity that shrinks by the minute until it completely evaporates as the dark path only grows darker.

The only ounce of creativity he displays is in his designs for replicating a prop from Nightmare on Elm Street 6, which must be his favorite movie franchise given his large portrait of Freddy Kruger hanging in his kitchen. His dreams and toiling finally come true when he recreates Freddy’s weapon of the Nintendo Power Glove with sharp blades on the fingers. It’s a device that serves no purpose in that it doesn’t make his situation any better - only serving to push his vile nature in the way he threatens and assaults others. Which, given his unease with talking to people and handling tough situations, is a frequent occurrence. This is a guy who can make a mountain out of a molehill for something as simple as buying Hot Pockets from a gas station. Even his only semi-friend Derek - just as much a shut-in as Marty - cannot save him from getting worse.

Buzzard is a character study of a disgusting slacker that is insanely infatuating for how disturbingly on point it portrays a doomed youth. I’ve known these people from the days of high school and it’s very eerie and strange to see how they function entering into adulthood. Heck, I was nearly on my way to being this bad. Tostino’s pizzas were my only dinner during my college and intern days. This movie is almost like looking into a crystal ball of what could have been had I proceeded down the path of sandwiching my pizzas between chips. This gives the film a very ironic charm for how discomforting it is to laugh at a life that went the wrong direction. Is Marty unlucky with the cards that were dealt him? Perhaps, but he’s become so bitter and unlikable that he dares you to find some twinge of humanity in his eyes, drooped and rolling with a stoner face. Never has the anger of a young man ever been so hauntingly disturbing and maddeningly hilarious.