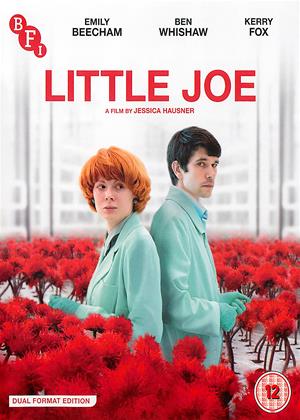 Very interesting idea. Charlie Brooker could have developed it into an interesting episode of Black Mirror. Unfortunately, Jessica Hausner is not able to structure into a convincing narrative. It feels repetitive and predictable. Some themes are heavy handed and the over indulgent and not very subtle aesthetic (color coding…) just emphasizes the shallowness of the whole exercise. Such a waste of good actors.

Alice (Emily Beecham) is a scientist and a mother: two things that come into sinister contact in this odd, detached but very intriguing movie.

One evening, Alice brings back a plant to her home and her son - something she has been working on, it needs special care and attention and could revolutionise the industry. Its presence and the hormones it releases, are designed to literally make the owner happy. She names the plant Little Joe, after her son. The plant has been designed not to reproduce by itself, for commercial reasons. However, the question is, is it finding another way to live on? And is her son one of its first victims?

I thought the movie took a cue from 70s horror. It's got this stillness about it and a crisp, clinical visual sense. It's full of these washed out blues, greys and greens, punctuated by shocking reds, purples and pinks. There's this atonal, jarring soundtrack by Teiji Ito which is reminiscent of Mica Levi's work from Under the Skin. In fact, this movie has a similar otherworldly atmosphere to Under the Skin.

Director and co-writer Jessica Hausner keeps many details and character motivations ambiguous, which may frustrate some. But I found the balance between revelation and restraint, heavily weighted to the latter and not the former, really intoxicating and it kept me interested. If anything, I'd have liked more restraint especially in the film's third act, as extra plot developments do paradoxically reveal the plot's occasional lack of drama.

However, this ambiguous, detached British indie sci-fi (horror?) is visually bewitching and really gets under your skin.

Sorry, but this was a dreadful film! I don't as a rule review films but feel the need to on this occasion. The plot was thin, the acting poor and the whole thing just became more and more painful as it went on. Maybe I'm missing something?