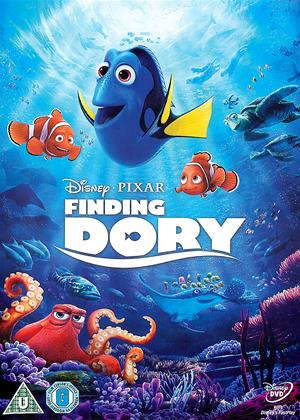 Some points: 1) FINDING NEMO was a classic bit of animation which, for once, would match (in the script more than anything and the characters) classic Disney; 2) this is no FINDING NEMO.

The animation is great THOUGH they achieved the same effect in the 1940s by actually filming sets with 3 or 4 layers rather than on a computer.

The story is good too with some really funny parts.

But the awful political correctness spoils it - like most Hollywood movies it's all about ' a girl being herself and not needing men - girlpower yeah!'

I HATE that stuff - Frozen etc - no need for such trite promotion of so-called 'gender equality'.

But I am being too harsh maybe - this is better than most animations and most movies. 4 stars then, but FINDING NEMO gets 5!

This is, for me, the movie which confirms once and for all that the old Pixar is dead. The independent studio that gave us a string of the most brilliantly inventive, funny and magical films of all time has finally succumbed to the corporate will of its parent company, Disney, and the result is a sad day for cinema.

Obviously, given the box office returns, I may be in the minority here, but I would not mind betting that many of those who did fork out to see this at the cinema and who are old enough to remember Finding Nemo would agree this is not a patch on its predecessor.

The fact that it is a sequel is in itself a bad start. Finding Nemo was a great stand-alone story, and piggy backing on the ideas and characters from that film is a weakness throughout. Dory in her supporting role in the original film was fine, but here she is incredibly annoying, and there are far too many irksome and repetitive scenes that highlight her inadequacies.

The octopus is a great new character, but too many others are stereotypical and well-worn, and the writing is neither as fresh nor as inspiring. In fact, considering it was written by the same person who did Finding Nemo, it just shows how the dead hand of Disney has influenced the outcome. This film is overly wordy, overly moral and high-handed, and overly stupid - the final 20 minutes is utterly conventional formulaic nonsense that would never have seen the light of day on Steve Jobs' watch.

I guess a country that can elect Donald Trump is not a very critical one, hence the gushing reviews for this, but if you must watch it please don't say I did not warn you. Brilliantly inventive, funny and magical this certainly ain't!

Not a patch on the original! - Finding Dory review by CS

Finding Nemo was a brilliant new twist on the cartoon film genre and was deservedly a big hit, however this follow on is anything but! Apart from making lots of money through the hype, I fail to understand what the point was of making this film? It's slow, boring, unoriginal, recycles classic cliches and is simply badly made! The script isn't funny, the voices and characters fail to match the humour, empathy and feelings of the original, I found the plot highly predictable and the ending is simply silly! This is supposed to have bene a big seller at the cinema, but personally I think it probably sold more on the hype than on what viewers thought! There haven't been many good cartoon films come out recently and it almost feels as though the industry has simply ran out of new ideas and instead simply keeps on re-hasing the same old formula over and over again! For me this film was a very big disappointment!

Finding Nemo has always appeared to me as Pixar’s perfect story. Sure, I adore the likes of The Incredibles and Wall-E, but Finding Nemo always held a special place in my heart for its precision story. Such a claim was usually scoffed at by colleagues, but when I told them to watch the movie again and think about it, they inevitably came to the same conclusion. I realize placing the movie up on such a high mantle will destine Finding Dory for disappointment.

Because, yes, Finding Dory is nowhere near as joyous, wondrous or well-developed as its predecessor. It seems to almost go without saying the way the picture applies the same familiar story to the side character of Dory. It’s not such a stretch to see why such a decision was made. Dory quickly became a standout character that stole the show in Finding Nemo. How could anyone forget her goofy whale talk or her mantra of keep on swimming? But is Dory really a strong enough character to hold her own as the star and not just the comic relief?

The short answer is no, but Pixar still does their best to weave a story around the character. Dory has problems with memory as she becomes easily distracted and forgetful. But when fleeting memories of her parents begin to surface, Dory enlists the aid of Marlin and Nemo to help find them. And though Dory does become lost in her journey that takes her from the ocean to an aquarium, the A plot is finding Dory’s parents so that there’s something for Dory, Marlin and Nemo to do in this adventure.

Plot wise, it’s a retread and admittedly the weakest point of this picture. There’s thankfully enough new characters to meet along the way to make the usual journey appear a tad more original. Dory’s most prominent ally in the aquarium is a world-wise octopus voiced by Ed O’Neill. She later befriends a whale shark Destiny (Kaitlin Olson) who, even though she seems to speak English well enough, humors Dory’s obnoxious ability to speak the language of whales. Helping out in her voyage is a beluga whale Bailey (Ty Burrell) who uses his echolocation to act as her map. While they may not be as memorable as a surfer-dude turtle or fish-friendly shark, they’re at least silly and cute enough to garner some smiles.

As with any Pixar animated production, the script aims for emotion in Dory’s struggle. This is where the picture shines best as the story manages to find developments to place the characters in emotional situations. There are moments where our characters are kicked down dark holes, fearing they’ll never see their family again. In contrast to Pixar’s previous movies, this isn’t the strongest of their tear-jerkers. It doesn’t help that it’s playing off a common sequel trope of merely expanding on duplicating the same story rather than branch out into a new one. This goes double for the third act which devolves into the expected elements of a frenetic chase where sea creatures have to escape humans. Come on, Pixar; that’s a Dreamworks maneuver.

Let’s get this out of the way for the eager kids and their eyeballing parents. Yes, Finding Dory is cute. In particular, baby Dory may be the cutest character Pixar has visually produced. There should be no question at this point that Pixar is at the very least capable of delivering a picture that is visually stunning, emotionally engaging and usually solid on humor. When Pixar is at their best, they can make an animated movie incredibly clever and unique in a manner that no other animated studio can accomplish. But even with the returning talents of director Andrew Stanton, Finding Dory still suffers from the dreaded effects of sequel-itis, despite its plucky determination to just keep swimming the same stream.