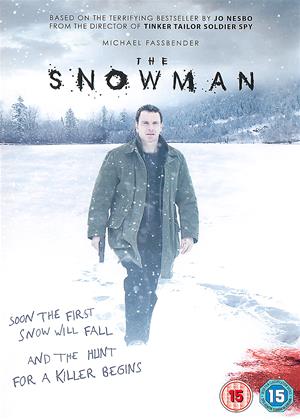 Reviews (13) of The Snowman

Just a mess of a film - The Snowman review by TH

You'd think a film directed by Tomas Alfredson (Tinker Taylor Soldier Spy, Let the right one in) and produced by Martin Scorcese would be half decent, think again. It has a feel of 'Girl with the dragon Tattoo' about it being set in snowy Norway and has a flimsy plot about a serial killer bumping off sexually promiscuous people and then building a snowman as his calling card with Michael Fassbender (Harry Hole, yes that is his name) stars alongside Rebecca Ferguson as the detectives. No real character development to make you feel remotely interested in the people, the editing in the film is shockingly bad, jumping from scene to scene poorly and the climax just poorly executed and rushed and to a degree laughable. That a side some nice shots of a snowy Norway but that a side a really poor thriller.

snow-good - The Snowman review by rm

Could have and should have been a lot better! - The Snowman review by CS

I was expecting this to have depth and a slightly supernatural edge to it. Whereas films like the Hannibal Lecter series were quite deep and created strong character development, allowing the actors to really get their teeth into their characters, this film never really goes deep at all and a lot of what should be character development is missing. There's never really any strong explanation as to why the killer is doing what they do, how they are choosing their victims and there are very odd and disjointed flashbacks to another detective in the past. This could have been such a good film if only the script had bothered to delve a bit deeper. Fassbender's talent is wholly wasted on this film it's very slow, disjointed, missing pieces and also somewhat predictable!

terrible film..don't waste your time watching it..flimsy plot which doesn't add up..terrible acting from credible actors so therefore the script must have been pants.

Just read the book - The Snowman review by PC

I really enjoyed the book but this is a terrible adaption, it is muddled and appears to forget the main story. Hard to imagine Michael Fassbender appearing in a worst film this year, sorry forgot about Assassins Creed!

Disjointed - The Snowman review by AC

Loved the book. What did they do to the film? Really unsubstantial - didn't get a feeling for the characters, except perhaps for Fassbender. Katrine Bratt didn't die in the book I'm pretty sure. Dreadful. Very disappointed.

An enjoyable, undemanding thriller - The Snowman review by BG

After the critical kicking it received, I expected The Snowman to be a horrific mess of biblical proportions. Therefore I was pleasantly surprised to find it largely on a par with much of Hollywood's thriller output.

It's easy to see where the flaws are; there are confusingly juxtaposed scenes with Val Kilmer's alcoholic detective (miscast), and a frankly laughably 90's plot device that sees Fassbender's 'Harry Hole' keep waking up drunk in different places.

However, the story itself has enough meat on its bones and enough nastiness in its tank to keep the average thriller fan happy. The basic thread is that people are going missing, and they may or may not be connected to a strange threat Hole has received, signed with an image of a snowman.

The scenery is gorgeous and mysterious, and adds a huge boost to the allure of the film. Icy lakes and thick snowdrifts fill the frame constantly, and the change of location away from America is more than welcome.

Fergusson is fun and jagged as Hole's driven colleague (although could possibly have been given more to do), and the supporting cast largely help to round out a feeling of misdirection and suspicion.

Like all good murder mystery thrillers, it's a warped tale of psychological harm, and if you can overlook the holes you'll find more than enough here to enjoy.

Awful - don't waste your time - The Snowman review by CKM

I thought with such a stellar cast this would be so much better - I was bored to tears and switched off (literally) way before the end .....

Plot makes no sense what so ever, film smacks of someone running out of money and just mashing something together to try to recoup losses.

Dissapointing - The Snowman review by KB

I agree with the other reviews that it is terrible. The acting was awful nothing added together just jumped from one thing to the next. Do not watch

This is the worst film I've seen in a long time, just terrible. From the first scene where there was a very unrealistic act of violence, I knew it was going to be rubbish, lasted about half an hour then had to turn it off. How can anyone have thought that a snowman as a sinister symbol of murder was a good idea - its a snowman -thats what kids make in the snow, for fun, it isnt scary and cant ever be scary. What a joke. I cant believe I got duped into putting this on my rental list.