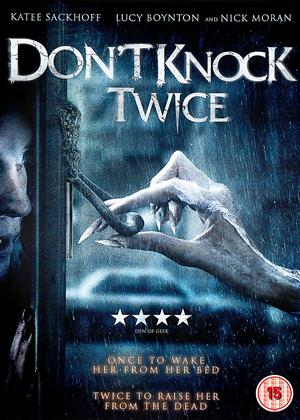 Synopsis:
For Jess (Katee Sackhoff), life has never been better. A successful American sculptor, she has recently returned to the UK, where she spent much of her troubled youth, Now happily married, wealthy and settled, all that remains to make her life complete is to rebuild her relationship with Chloe (Lucy Boynton), the daughter she was forced to give up nine years ago. But when Chloe agrees to come and live with her, Jess's optimism to make amends is soon crushed as her daughter is hiding a horrible secret...A supernatural curse has claimed the life of her boyfriend, Danny (Jordan Bolger), and is now coming for her.
Soon Jess comes to realise that she is all that stands between her daughter and the terrifying supernatural force.
Actors:
Katee Sackhoff, Lucy Boynton, Javier Botet, Nick Moran, Jordan Bolger, Pooneh Hajimohammadi, Ania Marson, Richard Mylan, David Broughton-Davies, Callum Griffiths, Gabriel Trimble, Megan Purvis, Celyn Evans, Sarah Buckland, Lee Fenwick
Directors:
Caradog W. James
Producers:
John Giwa-Amu, Claire Moorsom
Writers:
Mark Huckerby, Nick Ostler
Studio:
Signature Entertainment
Genres:
British Films, Horror
Countries:
UK

This is a very effective horror film involving a sculptor who attempts to rebuild a relationship with her estranged daughter. While Jess (Katee Sackhoff) has become fairly successful in her field, Chloe (Lucy Boynton) is mischievous, occasionally bratty and appears to have attracted the attention of a demon.

Having got that plot detail out of the way, we are then treated to some scary set-pieces, some of which are familiar from other similar horror projects, and others which are more impressive on their own merits. While the plot itself isn’t advanced much during this time, other than to cast doubt on who exactly the true villain is, it is enormous fun to sit back and let Director Caradog James’s effectively orchestrated chills do their work.

The pay-off however, is that there isn’t one. We find out what the entity isn’t, but we don’t find out what it is. Not that films, horror in particular, need to have every plot detail tidied up by the close – sometimes only having suggestions as to the perpetrator of evil is enough. It is all down to individual opinion, and mine is that ‘Don’t Knock Twice’ is a very effective, well played and beautifully written horror venture. My score is 8 out of 10.

Stumbling upon a decent horror flick without having any expectations beforehand is like a holy revelation to me, since most of the time the exactly opposite tends to happen. Don't Knock Twice turned out to be one of those rare instances where your expectations were exceeded by a significant margin: not bad for a film that I stumbled upon by pure chance. But, now that it happened, I’m glad that it did, since Don’t Knock Twice would’ve otherwise flew under my radar and the connection between me and this flick would’ve never be made. Which brings me to my next point.

The film is directed by Caradog W. James, which does a darn good job at getting the most out of the actors and translating the (potential) genuine terror from the screenplay onto the screen. To this extent, the story is very unpredictable and quite original I might add, where the suspense slowly builds up into a crescendo of a deeply-rooted human horror – i.e. the horror of the unknown. To add, the additional drama serves well to the overall premise and it is only a matter of time as to when other horror flicks would employ this narrative technique (hint: it’s very effective!).

In regards to the acting, Don't Knock Twice features some of the most surprising performances from indie actors I’ve seen in quite a while. Especially worth noting is that of the distracted but always on-the-ready daughter Chloe (Lucy Boynton); it seems that this actress has a knack for particularly interpolating her charm into some lesser-known creepy stories (‘February’) and in this light she doesn’t disappoint. Overall, all of the characters (including Chloe’s mother Jess, as played by Katee Sackhoff) are fleshed out thoughtfully and well-enough to warrant at least one viewing. Of course, the argument of whether or not these characters should’ve done this or that is irrelevant, because they only exist in the creators’ minds (well, except for Star Wars’ fanfiction), and THEY themselves decide on how things would play out. After all, it’s easier to criticize than to make a film, right?

One last point worth noting is that Don't Knock Twice doesn’t feature any CGI monsters or other laughable apparitions (probably due to budget constraints). However, this fact works in favor of the film and provides for a much-needed opportunity to ponder about the horrors of some unsaid and unexplained things. This is a nice change from your run-of-the-mill horror blockbuster that makes everything BUT scaring moviegoers. The effort is there however, so you’ll just have to substitute that which you don’t see for virtually anything that scares you at night (boggarts anyone?).

Overall, Don't Knock Twice is eerily atmospheric, so make sure you get your emotionally supportive friend with you before delving into this one.