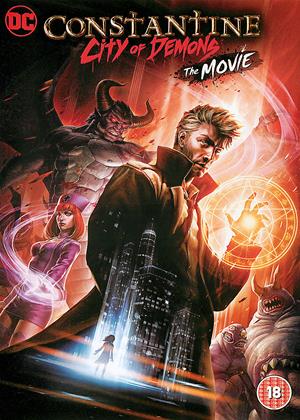 Synopsis:
A decade after a tragic mistake, family man Chas Chandler (voice of Damian O'Hare) and occult detective John Constantine (voice of Matt Ryan) set out to cure Chas's daughter, Trish, from a demonically induced coma. With the help of the mysterious Nightmare Nurse, the influential Queen of Angels and brutal Aztec God Mictlantecuhtli (voice of Rick D. Wasserman), the pair just might have a chance at outsmarting the demon Beroul (voice of Jim Meskimen) to save Trish's soul. In a world of shadows and dark magic, not everything is what it seems and there's always a price to pay.
The path to redemption is never easy, and if Constantine is to succeed, he must navigate through the dark urban underbelly of Los Angeles, outwit the most cunning spawns of hell and come face to face with arch-nemesis Nergal - all while battling his own inner demons!
Directors:
Doug Murphy
Producers:
Butch Lukic
Voiced By:
Matt Ryan, Damian O'Hare, Laura Bailey, Emily O'Brien, Robin Atkin Downes, Rachel Kimsey, Jim Meskimen, Kevin Michael Richardson, Rick D. Wasserman
Writers:
Steve Bissette, John Ridgway, John Totleben, Jamie Delano, J.M. DeMatteis, Philip Tan, Alan Moore, Mike Carey
Studio:
Warner
Genres:
Action & Adventure, Anime & Animation

Reviews of Constantine: City of Demons

It’s been over a decade since DC Comics started treading down a more adult path with their direct-to-video animated movies. Not only were their adaptations more faithful but also more willing to test content most unorthodox, even for PG-13 animated productions. It still astounds me how such an adaptation as The Dark Knight Returns was given a PG-13 rating with its heavy subject matter and brutal violence. By the time we got to The Killing Joke, an R rating was inevitable. And now that DC’s animated division is willing to go down some darker territory, such stories as the more twisted life of Constantine can be explored without fear or handcuffs for a comic book of demons, torture, and gore.

The premise is far more refreshing than usual crop of Batman and Justice League DC animated movies that are far more abundant. John Constantine, a smoking dealer of the demonic, is undergoing treatment for his powers but is called out of his therapy for a new assignment. John’s best friend Chas Chandler contacts him with a dire issue involving Chas’ daughter having her soul being stolen by some demons. This is shaky ground for the two of them considering John has failed to save a young girl before during an exorcism gone wrong. John may not be the best guy when it comes to dealing with demons, but he’s Chas’ best shot at saving the girl.

John’s path leads him down a twisty road of familiar acquaintances. He calls upon the Nightmare Nurse for diagnosis and assistance when dealing with the missing-soul girl in the hospital, trying to keep the hungry creatures from the other side at bay. A demonic possessor of souls residing in Los Angeles by the name of Beroul presents himself as a tubby mafia type who’ll only agree to help John for a few dirty deeds to be carried out. Beroul goes the extra mile to be a sadistic demon, showing off his unfinished pool of bloody bodies and his ballroom of parties which involve watching old movies of people being gored and a band playing instruments of human body parts. The piano shooting bats out of a human anus is a bit much but it’s clear this demon isn’t very subtle with his love of blood and torture.

We also meet some allies, including Angela, the literal living embodiment of Los Angeles. There are also some demons who are easy enough for John to manipulate, as with the Aztec figure Mictlantecuhtli, who at first accepts John’s offer for demon souls to feast on, only to grovel for help when John plays him like a fiddle. And there’s still some unfinished business John has with Nergal, the original demon who took the young girl many years ago.

True to its R rating, City of Demons boasts plenty of brutality and bloodshed in more ways than one. There’s a fearlessness in this comic book movie to better embrace the horror DC Comics’ Vertigo brand of comics were better known for. And it’s a surprisingly effective and refreshing horror from the usual crop of rather timid comic book tales, especially within the realm of live-action productions which seem too big and silly to ever go this far. While the story itself remains about as average as an anti-hero coming to save the day, its demonic decadence that really makes City of Demons shines as a brighter (or darker) outlook for these DC Comics movies that I hope they pursue. Or, at the very least, spin these types of films off into a new Vertigo line of movies because I’m for more horror-based animated adventures.