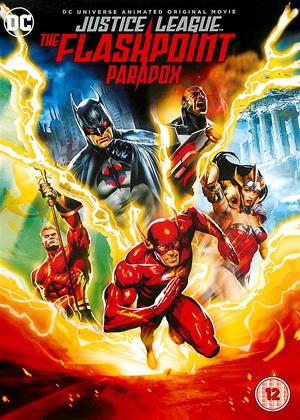 Synopsis:
We all wish for the chance to go back in time and change things, and for The Flash, that chance is within reach. As a boy, Barry Allen had his life torn apart when his mother was a victim of a violent crime, but now, using his power of super speed, he will traverse time to change that fateful day. His intentions are good, but changing the past has repercussions that could prove disastrous, as a fractured, alternate universe now exists in place of the familiar one. Stumbling through a twisted reality where even Superman is nowhere to be found, The Flash seeks the trusted wisdom of Batman, only to find a grittier, more violent Dark Knight in his place.
The Flash and Batman, with the help of Cyborg, race to restore the original timeline while the alternate world is ravaged by a fierce war between Wonder Woman's Amazons and the Atlanteans led by a battle-hardened Aquaman. With breathtaking action and an all-star voice cast featuring Kevin Conroy, C. Thomas Howell and Dana Delany, it's a bold, emotional vision that will forever alter the landscape of the DC Universe!
Directors:
Jay Oliva
Producers:
James Tucker
Voiced By:
Justin Chambers, C. Thomas Howell, Michael B. Jordan, Kevin McKidd, Dee Bradley Baker, Steve Blum, Kevin Conroy, Sam Daly, Dana Delany, Grey Griffin, Cary Elwes, Nathan Fillion, Jennifer Hale, Danny Huston, Danny Jacobs, Peter Jessop, Lex Lang, Vanessa Marshall, Candi Milo, Ron Perlman
Writers:
James Krieg, Geoff Johns, Jack E. Miller, Ralph Morales, Nick Cardy, Pat Broderick, Robert Bernstein, Kurt Schaffenberger, Howard Purcell, Joe Gill, Mike Sekowsky, Gardner Fox, Robert Kanigher, C.C. Beck, Ramona Fradon, Brandon Vietti, Mike Carlin, Bill Parker, Phillip Bourassa, Bob Haney
Studio:
Warner
Genres:
Action & Adventure, Anime & Animation, Children & Family

Before DC Comics rebooted just about all their titles with the New 52 event, there was one last comic book event to cap everything off. And it was essentially a “kill everybody” story, albeit in an alternative timeline. It’s more of a what-if story than canon, though it’s technically considered canon by comic book logic (it’s a DC thing). At any rate, Flashpoint takes notable risks within both the comics and animated films, even with the fallback of timeline paradoxes.

The story is that Barry Allen, aka The Flash, finds himself awakening in a much different world. He doesn’t have his powers and the heroes are more violent than heroic. Batman was now born from Bruce’s father taking on the title after his son was murdered and his wife descended into clown-themed madness (yes, she’s the Joker in this world). Superman has been imprisoned as a malnourished alien. Hal Jordan never became the Green Lantern and met an unfortunate end. But the most apocalyptic of developments is that Aquaman and Wonder Woman are now at war with each other, leading to a battle of the surface world versus underwater forces.

And this war is a brutal one. Many heroes bite the dust in horrific ways, becoming slaughtered, gutted, and gun down without remorse. Aquaman’s forces will board a ship with Deathstroke and Lex Luthor, brutalizing them as though they were low-level pirates. Wonder Woman will ruthlessly slaughter Billy Batson, not caring that it is a kid who inhabits the powers of Captain Marvel. And that’s just the tip of the iceberg.

But what’s more compelling about such a story is the great reveal of how Flash’s rival of Professor Zoom was behind all of this. The changes in the timeline were less that of Zoom’s doing and more a product of Flash’s emotional needs. The origins of Flash involve his mother being murdered by Zoom going back in time to torture Barry’s upbringing. Barry had inadvertently gone back in time to prevent this, thus leading to the altered timeline and his diminished speed powers. So in order to save the world, Barry ultimately has to give up his own happiness for the fate of the rest of the world. The logical choice here is easy but the emotional turmoil is hard to bear.

I especially dug the friendship that kinda/sorta bonds between Flash and Batman (in both timelines). They both have experienced loss at such young ages and can sorta understand what the other is going through. There’s a rather tender finale to this whole violent scenario where Flash manages to bridge a gap by relaying a message from Bruce’s father to Bruce in the stable timeline. It’s a rather sweet and meaningful moment to place a cap on an otherwise gruesome experience.

Flashpoint not only launched the New 52 line of comic books but the DC Animated Movie Universe as well. It’s a strong start for both and the film only gets better over time. Though I personally think there’s much more emotion coursing throughout the comic book run than the film, this is still a rather astute adaption that gets most of the highlights right. And there’s something so unique about seeing such a strong adaptation of a comic book event I admire so.