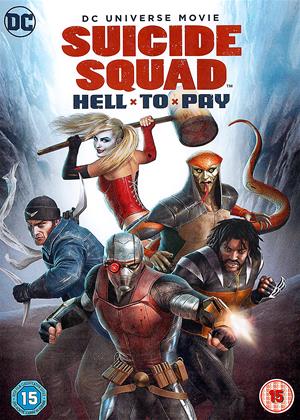 Rent other films like Suicide Squad: Hell to Pay

The film starts with Deadshot (surprisingly well-voiced by Christian Slater) going to retrieve some kind of McGuffin from a Kingpin-like thug on a moving train. His team consists of two disposables (Jewelee, voiced by Julie Nathanson and another one whose name I’ve forgotten), and one, spoiler alert, mercenary with traitorous intentions. As these things go however, Amanda Waller (Vanessa Williams) quickly discovers the traitor via some dumbness of said disposables and eliminates these mercenaries in a quite grotesque fashion. During which, Deadshot mercy kills Jewelee and it’s immediately back to prison for this man.

While this McGuffin is solved, another one immediately pops up on the radar: a “Free Get Out of Hell” trinket-card which allegedly does just that: enables the wearer at the time of his death to skip hell (if they’ve been naughty throughout their lives) and go to heaven instead. Now, as it turns out, everyone wants this card for themselves, but the card can be only used once and it’s basically a worthless plastic afterwards. Who will get the card?

Therein lies the awesome character build-up and the internal conflict within the “Task Force X” (colloquially known as Suicide Squad), with each and every character holding a grudge against another one; for instance, Bronze Tiger (Billy Brown) is a mercenary killer-turned religious who swears to never take another innocent life. He’s also deeply religious and believes that this ticket is a true salvation at-hand. Killer Frost (Kristin Bauer van Straten), on the other hand, cannot stand Harley Quinn’s (Tara Strong) infantile antics, and she wants money as well. That’s within the first team assembled by Waller; however, there is another team on the prowl, comprised of Zoom (C. Thomas Howell), Silver Banshee (Julie Nathanson), and Blockbuster (Dave Fennoy) with their agendas pitted against the other team, and others as well. On top of that, there is the immortal-yet-vulnerable Vandal Savage (Jim Pirri) who senses that his time is up after nearly 50.000 years of roaming the Earth freely and killing everything in his sight (under the guise of history’s most bloodthirsty tyrants such as Julius Caesar, Genghis Khan, and more). Remember: all of these individuals are after the card, and it can only be used once. Sounds interesting? It is.

If you’re generally a fan of good storytelling, then Suicide Squad: Hell to Pay is a definitive must-watch.