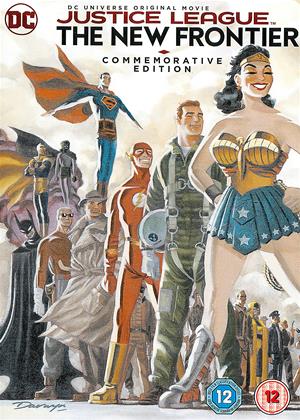 There’s something so compelling about the style of Darwyn Cooke in The New Frontier comic book. There’s a retro style to the simplified design with bold outlines and color yet a sense of satire in the way that it wants to say something more. It also didn’t shy away from having heroes address tougher topics of unseen enemies and a brewing fear that requires more than just a good punch to save the day. It’s also a clever way to tap into the tensions of the Cold War without making it specifically about the Cold War.

The film stays true to the comic by setting the story after the events of the Korean War with a new villain on the horizon. It is during this time that key players of the Justice League come to be. Hal Jordan will inherit the powers of the Green Lanterns when discovering the dying alien of Abin Sur. J’onn J’onzz is the martian who arrives on Earth and puts on the disguise of a human being to conceal his true nature. The other heroes of Superman, Batman, Wonder Woman, and The Flash are all present but mostly working freelance. They’ll occasionally stop a villain scheme but mostly keep to themselves for their conflicting views. Superman in particular has serious issues with the vigilante virtues in the grittier Batman and Wonder Woman, questioning their methods.

But the prime villain they fight this time is a much different beast. Clues of a doomsday cult seem to signal that some horrific being called The Centre is on its way. The heroes will need to put aside their differences if they hope to defeat what could be the very thing that brings about the end of days. The Centre is obviously a massive metaphor for nuclear annihilation, a fear that was prominent of the era and lingered long after. The story becomes compelling in that heroes have to be clever about how they attack such a monster that can literally spew out prehistoric creatures. There are sacrifice and bloodshed during such a battle with the stakes rather high.

The film just looks amazing as well. The character designs are perfectly maintained from the comics which is no small feat considering it looks unlike any DC animated movie. There’s also a very distinct nature to the characters as well, where Superman feels more regal with the bolder S and Wonder Woman feels intimidating with her larger stature. The primary Justice League characters all feel as though they have a real drive in such a story and don’t just leap at the chance to stop another threat. It also helps that the threat is one comprised of both a cult and an unknown entity, leaning more on Watchman vibes of topical takes.

The New Frontier may become a bit too on the nose by the final sequences which showcase a montage of heroes and villains amid JFK’s inspiring speech. But so much of this story just works so well to build up to that point that it doesn’t become a black eye for taking a sharpie and circling the central point. It’s a film that takes these familiar characters in unique directions, posing their stances and philosophies in a chaotic time. There are a number of comic books that already do this but view within the action-packed glitz of DC superheroes that feel this poignant. As one of the earliest DC direct-to-video animated movies, this is easily one of the best.