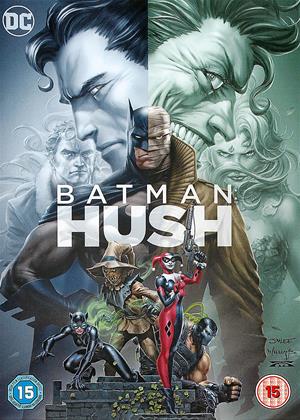 Hush is a mixture of both a whodunnit mystery and a romance for Batman. The film tries to provide a better balance than that of the original comic which relied heavily on a lot of past Batman lore. And while there are some strengths to this premise, it’s aggravating one from being so close to being a better showcase of Bruce Wayne from an animated cinematic universe that has the freedom to do so.

For the more personal story about Bruce Wayne, the hero tries to find time outside the cowl. He attends a party where he tries to reconnect with his friend Doctor Thomas Elliot and maybe have a romance with Selina Kyle. Yet duties calls and friends become harder to manage and love often becomes even trickier to work into his life. Indeed, the film even finds it hard to work Bruce Wayne into the mix as opposed to Batman. Consider how he hardly sounds different when out in public. It seems the only time he switches into Batman mode is when his eyes narrow and he appears even more serious than he already is. There’s a moment where we’re meant to watch this transformation and yet it seems like only a slight and subtle twitch.

Foremost on Batman’s mind is a masked figure working from the shadows to orchestrate his demise. A trail of clues are left in the fact that he works through other villains to get to Batman. This includes supplying Bane with stronger toxins, Poison Ivy with stronger pheromones, and holding the Joker hostage so Harley Quinn commits to an assassination. Since Hush is only seen with bandages on his face, a mystery swirls around just who could be behind such a masterful series of crimes meant to damage Batman in more ways than one.

The film does change up a lot from the comic book and most of it for the better. There’s a lot of small changes, such as omitting references to No Man’s Land and Death in the Family, but the biggest switch up is the true identity of Hush. While initially a more cunning surprise while also staying true to the real mastermind of the scheme, I think it removes a more personal element. The reveal is more of a shock than leaning better into the whole story. Consider if Batman: Mask of the Phantasm ended up featuring the Phantasm not being a woman from Batman’s past but The Joker. Surprising, sure, but distant from the greater thematic elements about Bruce Wayne’s personal life and his need to address it before it turns toxic.

I liked the romantic steaminess between Batman and Catwoman but it’s a romance that gets reduced to not only familiar cliches but comedy as well. For example, there’s a scene where Selina learns Bruce is Batman and she notices scars on his body that she had put there as Catwoman. There’s a moment that could be interesting to explore but the conversation quickly diverts into banter more indicative of a rom-com.

Come to think of it, every Batman film in the animated movie universe has seemed to lean into comedy at some point. This is especially true of Hush the way Dick Grayson and Damian Wayne are written into the story, meant to play off straight-guy Batman with more joking about his personality. Some of it is just bizarre, as with Damian talking to Bruce about wearing protection and being cautious of drinks while on a date. That surreal edge of humor from Son of Batman still remains.

With just a little more polish, Hush really could be a solid little Batman mystery. As it stands, however, it’s merely a pleasing picture that explores some neat ideas about Batman as both a hero and person but never fully cracks them open.