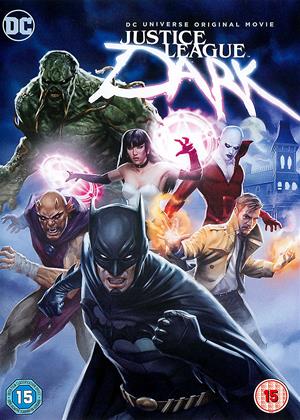 Justice League Dark is a solid piece of animation that makes for a great addition to DC’s library of animated films. To add, while animated in a just satisfactory manner, Justice League Dark is very creative and features some of the better stories that involve none other than Constantine (yup, he’s the protagonist of the film, despite Batman being in it as well). Finally, the film features a plethora of distinctive characters that all make their impact within the story. My particular favourite was the storyline of the Demon Etrigan, who managed to steal the show with his ‘verses that rhyme’ and his peculiar history of upbringing. “Gone! Gone! -- the form of man -- Rise, the Demon Etrigan!”

As said, Justice League Dark follows Constantine and Zatana (voiced by Matt Ryan and Camilla Luddigton) respectively, whose nemesis changes constantly throughout the duration of the film (bait-and-switch much?). However, this is done very carefully and flows naturally with the overall tone of the film. All things considered character-wise, Justice League Dark director Jay Oliva makes sure to give each character a distinctive voice both within the film’s boundaries and within the character’s internal struggles. Again, the antics of the demon Etrigan manage to prevail.

To the film’s credit, the humor that prevails in it is very well thought out and adds to the whole experience even further (by providing some long-needed breaks from the dramatic tension). The world-building is also excellent, and one shan’t be a DC fan in order to appreciate the sheer magnitude of what’s going on in the film. The animation is decent, but nothing out of the ordinary, while colour is typical for a feature done by the DC animation department. Voice acting is unarguably the film’s strongest point, where Jason O'Mara replaces Kevin Conroy in a refreshing attempt that comes JUST as good as Conroy’s Batman. In this regard, the movie ticks all the boxes in all the right places too.

In regards to tone, Justice League Dark is a very, well, ‘dark’ film. There is black magic used to cause peril to our heroes; then there are countless bad guys who find themselves preventing the path to victory of our heroes – only to realize it’s only been a misunderstanding if all. Plus, the magic is done very nicely and doesn’t interfere with the technology aspect of the film (as it’s the case with other features, yes I’m looking at you Dr. Strange). With that clear distinction between magic and technology, we have Batman doing his thing, as well as John Constantine progressing thanks to is supernatural abilities and one peculiar house (which felt kind of neat, to be honest).

All things considered, Justice League Dark is compelling, gritty, dark, thrilling, and involving both for the audience and for the characters within the film. Great feature to fill a Sunday afternoon or even a Saturday evening with.