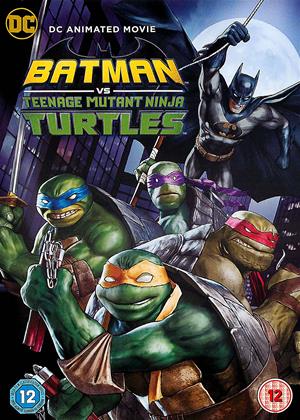 Rent other films like Batman vs. Teenage Mutant Ninja Turtles

Well where to start with this? Think of watching GBBO & thinking that you can make that amazing cake that Mary Berry has just whistled up. You then go and stick all the wrong ingredients in the bowl before taking it out of the oven long before it’s ready... None of the voices seem right, there’s no Kevin Conroy, no Mark Hamill, the closest the film gets is a passable Jeff Goldblum impression from a half fly/half human scientist (geddit?). The animation is a disappointment too rather in that grungy style of The Batman animations which works for none of the protagonists.

They also didn't seem to know what audience they were going for. Almost everything is goofy and jokey for kids - which is totally fine - except that there's occasional bad language and some rather brutal violence. As it stands, they made something that doesn't work for kids OR adults.

In the early 1990s, the two most cool franchises kid me was Batman and Teenage Mutant Ninja Turtles. I obsessed over the movies, comics, toys, and animated series of both, often meshing the toys into crossover plots of playtime. If 7-year-old me had heard word of a film where Batman teams up with the Teenage Mutant Ninja Turtles, I don’t know if my brain could take such overwhelming awesome. The kid in me loves this concept. The adult, however, can’t quite be as amazed by this crossover film, spawned from the comic books.

Perhaps it’s because crossovers of any medium have their appeal with age, more apparent as gimmicks now more than ever. After The Simpsons crossed over with Family Guy and Phineas and Ferb crossed over with The Avengers, anything is possible. Thankfully, the film doesn’t have to assemble some elaborate explanation for the vigilantes to cross paths. Why would they? The Turtles work under cover of darkness to defeat the evil Shredder. Batman take night shifts to tackle the crimes of Gotham City. It’s natural to assume they’d meet given their work hours and preference for the streets.

Their meeting come with the expected amount of commentary. Batman remains stoic and unmoved by mutant turtles because, let’s face it, he’s seen weirder stuff around Gotham. The Turtles, most of them being fairly goofy, provide some funny lines when remarking on Gotham. For example, why are police blimps hovering around the skies of Gotham? What purpose do they serve? Michelangelo asks this question and never gets a firm answer from anyone. There are some strong connections the Turtles make with other Batman characters. Leo and Batman naturally connect as dedicated heroes. Donatello and Batgirl hit it off easily as nerds with genuine chemistry amid chemistry. Raph can naturally respect the rebellious nature of Robin and Michelangelo has a decent Odd Couple relationship with the unamused butler Alfred.

The plot that brings these forces together is exceptionally unremarkable. The Shredder finds some ooze and teams up with Ra’s Al Ghul to use mutant-transforming ooze to better rule the world. What better place to unleash such a toxin than within Arkham Asylum, home to Batman’s most ruthless of rogues. What follows is little more than an excuse to transform that villains of Gotham into animal creatures. So if you really wanted to see Joker as a snake, well, this is the movie for you.

I’m a bit perplexed by the assembly of such a film. Based on the simple designs and the silly plot of Batman villains turning into mutants, I expected something more akin for the kids that would make the 7-year-old in me burst with joy. Yet the film is rated PG-13 and contains an extraordinary level of violence. Shredder and Ra’s Al Ghul, seeking to break into various locations, end up slaughtering security guards viciously. Backs are stabs and heads are decapitated. Bloodless, yes, but it’s still rather disturbing to see Shredder in such a dark light for a plot to turn villains into silly mutants with silly dialogue.

Batman vs. Teenage Mutant Ninja Turtles comes off as little more than lukewarm cheese for a picture more pleasing in its premise than execution. While I still love the classic appeal of the Turtles, it feels like they’re humor should be scaled a bit more adult if the picture really wants to feature such gruesome kills. It’s a film trapped in its own adolescense.