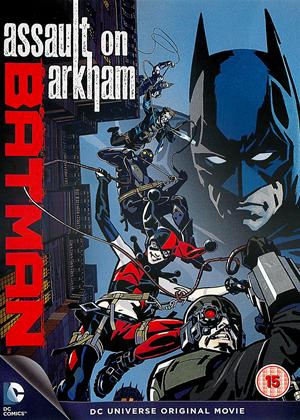 Reviews of Batman: Assault on Arkham

The rogues gallery of Batman finally receives the movie they deserve. While not the most iconic of the villains, a handful of colorful choices are given a chance to take center stage. Movies about villains tend to go one of two directions: the antagonists either switch sides as protagonists or we see them fall further down into the pits of evil. Assault on Arkham finds that pleasurable medium. It presents a scenario that makes us care about what happens to the villains, but doesn’t compromise on their sinister nature.

Staged as more of an outlandish Dirty Dozen, captured villains are selected by the government organization Suicide Squad to complete secret missions in exchange for lighter sentences. Seven of them are chosen to break into Arkham Asylum and take out The Riddler. Make that six when organization leader Amanda Waller demonstrates the explosive collars attached to their necks. Refusal to comply with the mission or being compromised will result in the automatic removal of heads.

What helps keeps the villains likable aside from the immediate threat to their lives is the campy nature of their personalities. They’re first introduced in a grindhouse style opening of each character given their own special credit. The villains themselves are mostly from the B and C levels that include Deadshot, Killer Frost and Captain Boomerang among others. The most immediately recognized would be the bubbly Harley Quinn, off/on sidekick to the meddling Joker. As expected, the Joker himself is present within Arkham and he does cause some expected trouble with his main squeeze (especially since she now has a thing for one of the members of the Squad).

Where is Batman in all this? He has the least amount of screen time and isn’t exactly an essential part of the story, but he fills the role perfectly as the one moral component. He beats up a few of the bad guys, but is conveniently tossed aside for most of the film until he is needed. There is a bit of a twist in how he infiltrates the batch of baddies, but it can be seen coming a mile away. And, surprisingly, it isn’t the Dark Knight who ends up saving the day or completely figuring out the real motives behind the Suicide Squad’s mission. It’s a bit of a change from the other Batman features especially since Kevin Conroy once again reprises the role.

The tone of the film is kept black and stylish with perfectly timed beats of dark comedy. The night before their mission, Deadshot accepts the sexual advances of one of the female members not out of attraction, but because of his “oh, screw it” attitude. While the group does form a certain bond over working together, they still maintain their villain tendencies by never wasting a moment to stab the person next to them in the back. I absolutely dug the shrewdness of Amanda Waller who appears far more vicious than she ever has in past DC animated movies.

Worth noting is that while this is another DC animated feature rated PG-13, it’s a very hard PG-13 that I’m frankly dumbfounded why it wasn’t boosted up to an R. Heads explode quite often in this picture with very bloody results including the bulgy cranium anticipation of the splatter. Characters engage in rather erotic sexual situations with enough partial nudity to drive any teenager mad. It’s an incredibly adult romp of action and violence which I absolutely adored, but it’s certainly going to be a bit much for younger viewers (especially those who have been following all the PG-13 DC animated features thus far).

With a pleasing group of antagonists to follow, Assault on Arkham achieves the rarity of rooting for the bad guys to win. The dynamic flow of the clashing personalities make such great use of the villains it makes you wonder why there are not more movies about them. It also has a giddy vibe with its dark humor and bloody fun violence echoing the campy shock of grindhouse action extravaganzas. It’s a refreshing change of a pace from the usual crop of DC movies that attempt to be dark tales, but with a noble sense of heroism. Assault on Arkham knows how to have fun with such gritty atmospheres.