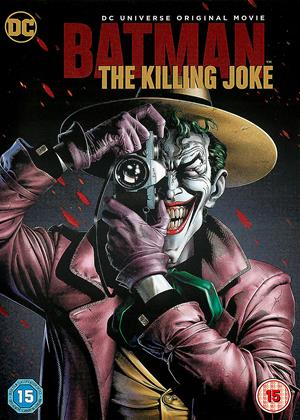 Reviews (1) of Batman: The Killing Joke

If this is a faithful adaption of the graphic novel it is completely unsuitable for kids and certainly doesn't belong in the children and family section.

Alan Moore has written some of the greatest of postmodernism comics. He has also demanded that his name be removed from any adaptations of his work, spanning everything from V for Vendetta to Watchmen. Surprisingly, the one time his name was in the credits as the source of the story was an episode of Justice League Unlimited which adapted his story for The Man Who Has Everything. It was quite the claim for Bruce Timm and his animation team behind the series. So why didn’t The Killing Joke, based on his most notable Batman comic, receive the same recognition? Due to this story being heavily rewritten and shirking almost all of its appeal, it’s very understandable why Moore wanted no part of this animated adaptation.

The Killing Joke was posed as a darker take on the nature behind the Joker and how he functions. The comic took aim at the Joker in a story where Commissioner Jim Gordon is captured and Batman has to save him. But Joker isn’t posed as his usual jovial criminal persona. He has gone much more grim, shooting Jim’s daughter Barbara and bounding her to a wheelchair. He also laments on his tragic past that led him down this darker path, a common staple of pathos among Moore’s more iconic stories.

While all that stuff is still present within this adult animated film, there’s a whole lot of fluff that is more toxic than it is busy work for the runtime. In particular, Batgirl is given a far bigger spotlight in this film. However, the movie does more to kick her to the curb than build her up a heroine we care about so that when she is inevitably disabled by the Joker, it’s heartbreaking. Instead, we get our broken far early. The film approaches the very uncomfortable topic of Batman and Batgirl being in a relationship. Batgirl is framed as being amateur at vigilantism and her frequent clashes with Batman lead to tension between them. That tension turns to sex. That sex turns awkward. The relationship goes sour and we’re with a deeply uncomfortable exploration of Batman’s sex life that plays little to no part in the final arc of this film.

The Killing Joke is one of the first DC Comics animated films to be rated R and it certainly feels as though it’s trying to lean too hard into that rating. The violence is pretty par for the course. Indeed, numerous other DC Comics animated films have presented aspects far more bloody, gross and gruesome with a mere PG-13. What more that the team behind this animated film bring to the table feels lacking past the more immediate storytelling of Moore’s comic. The use of profanity and discussion of sex gives more of a vibe as something splattered across a mediocre issue of Heavy Metal, desiring to be more adult than mature. And when one removes the maturity from Alan Moore’s stories that better explore the nature of heroes and villains, what we’re left with a sloppy film of misguided morals.

Producer Bruce Timm was asked at a convention about the inclusion of the odd and uncomfortable Batgirl sex arc to the film. He refused to comment but it was clear from his face that he wasn’t exactly proud of it. It certainly appears based on his response and what is up on the screen that this film is a mess. It’s a swirling of idea designed to deeper explore The Killing Joke but from all the wrong angles. The performances feel lacking, the story doesn’t pack the same punch of Joker’s pathos (considering how little of it we focus on) and the animation just feels far blander than the likes of previous DC Comics animated films. This is by far the weakest of their long line of animated films, which is shocking considering the talent at play and the story they rip from. Did I also mention this is the first DC Comics film to get a theatrical debut? A minor claim to fame in a film that is otherwise a failure of its postmodernism.