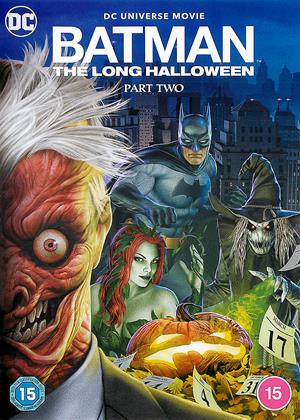 Rent other films like Batman: The Long Halloween: Part 2

Let down - Batman: The Long Halloween: Part 2 review by HM

Part one got some momentum up but it all thins out in a routine punch up conclusion and yet another version of how Two Face originated. Dissapointing and let part one down.

The second half of The Long Halloween is just as powerful, intriguing, and exciting as the first. It opens up more of the mysteries, puts more players on the table, and wraps everything up with a reveal more meaningful than just for the shock of solving a murder mystery. It may perhaps conform a little too much to keeping Batman’s rogue’s gallery a constant but manages to have its comic book cake and eat it too with a superhero story that embraces more of its thriller aspects than its costumed character gimmicks.

I really dug how the film opens with Batman being under the hypnotic control of Poison Ivy. He occupies a dream world of pleasure for a moment before being brought back to reality through Catwoman, one of the few who knows of Bruce Wayne as Batman. They have a connection of both romance and protection with their relationship feeling more concrete in such a picture that takes time for the more personal moments.

There are plenty of intimate moments in this picture that continue the marital dramas of Gordon and Dent. Gordon struggles but maintains his control on his job and family as the case of finding the Holiday Killer continues on into months. Dent, however, grows worse. His relationship starts to crumble as his control is lost in trying to bring the Falcone family to justice and arrest the serial killer who only strikes on holidays. If you’ve been waiting patiently for him to finally become the villain of Two-Face, you’ll get that moment in a fairly unexpected reveal and a greater payoff.

Many other villains are thrown into the mix as well. In addition to more questionable members of the mafia Falcone family making a debut, more antagonists come out to play for criminal control of the city. Penguin has a stake in getting his share of the pie. Joker just loves the cruelty of it all, able to get in a decent joke about phones while beating down on gangsters. Scarecrow and Mad Hatter are also present for bank robberies and such. I even dug how a little bit more of Grundy was explored in this entry while still making him a bit of an interesting enigma.

The animation remains just as fascinating as the previous entry. The thick edges and bold colors give the comic book feeling while still looking vibrant and alive. The editing also remains a robust feature with how the story makes fairly large jumps in time, choosing just the right moments to highlight as the case builds. There’s even more action in this entry in terms of one-on-one combat whereas the previous film featured more grand displays of terrorism. The action has a more grounded sensation in the second part that keeps the focus more on a crime story than an epic superhero story where Batman has to prevent Gotham City from blowing up or something.

The voice cast remains just as stellar as the last entry and makes some keen additions. Alyssa Diaz gives a small but pleasing portrayal of Gotham’s tough detective Renee Montoya. Katee Sackhoff’s Poison Ivy has a perfectly sultry delivery. John DiMaggio gives his usual manic glee to the role of Mad Hatter while Robin Atkin Downes does a perfectly dark droll for Scarecrow.

When combining the two films together, The Long Halloween is an incredibly pleasing Batman animated film. It gets to the heart of what makes Batman stories so compelling by posing complex and mysterious characters in a gritty neo-noir framing. While it seemed as though Batman was losing its focus with such off-putting pictures of Batman becoming a martial artist, steampunk hero, or working alongside the Teenage Mutant Ninja Turtles, this picture is a refreshing reminder of just why Batman remains one of the most compelling of superheroes.