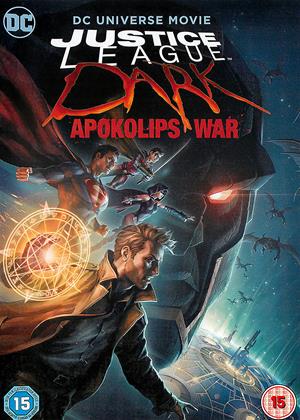 Synopsis:
The 'Justice League' has always been Earth's first and last defense, but with the imminent arrival of 'Darkseid' and the horrors of war that will follow, everything is about to change! With time running out, the Justice League will need all of its members and their powers like never before. But even the world's most powerful Super Heroes, including reluctant member John Constantine, may not be able to make a difference against Darkseid's legions. Witness the most shocking battle in the DC Universe, where survival itself is a victory.
Directors:
Matt Peters, Christina Sotta
Producers:
Amy McKenna
Voiced By:
Roger R. Cross, Rosario Dawson, Christopher Gorham, Camilla Luddington, Shemar Moore, Jerry O'Connell, Jason O'Mara, Matt Ryan, Sachie Alessio, Stuart Allan, Ray Chase, John DiMaggio, Taissa Farmiga, Liam McIntyre, Tony Todd, Rebecca Romijn, Hynden Walch, Rainn Wilson
Writers:
Ernie Altbacker, Mairghread Scott
Studio:
Warner
Genres:
Action & Adventure, Anime & Animation, Children & Family

Well there is a semblance of a plot but this gives way to simple minded action violence. More is less and it gets less and less as it drags on. Not suitable for kids and too dumb for adults. Avoid if you value your intelligence.

Around the beginning of the third act, Superman asks Constantine why the paranormal sorcerer is still on this adventure with nothing to be gained. Constantine shrugs it off; “I guess I just want to see how it all turns out.” I’ve been of a similar mindset to the DC Animated Movie Universe. The film’s occupying this connected series have ranged from pleasing to ho-hum, most of them being rather underwhelming as they continue to paddle along into darker territory. Thankfully, to cap it all off, Apokolips War is daring enough to take a few more risks and feel grander in scale and stakes.

The premise starts off simple enough. Darkseid has arrived in Earth’s vicinity and brought his whole planet of Apokolips with him. All of Earth’s forces, both heroes and villains, join forces to prevent Darkseid from invading the planet. Haven’t we already been through this dance with Justice League: War? And wasn’t rather lacking? But, wait, hold on! The heroes lose this match early. Earth succumbs and transforms into a hellscape after a two-year time skip. Everything is in tatters. Superman has lost his powers, poisoned by a Kryptonite tattoo. Batman has been brainwashed by Darkseid into being his loyal servant of managing Earth’s dissection. And the likes of John Constantine and Etrigan, once fierce wielders of the demonic, are now drunken messes.

Naturally, the heroes will lick their wounds and try to make a triumphant turn-around. But this mission is not made the least bit easy after the loss incurred. Some heroes have been transformed into cybernetic slaves of Apokolips. Some have resorted to reforming themselves into resistance cells. Others were brutally gored in the events of Apokolips. And when the heroes finally rise up to fight back against Darkseid, they suffer horrific losses. Darkseid’s pursuing Parademons absolutely shred through the heroes, presenting a real threat where even if Darkseid is beaten back, there may not be much left to live for.

Branded with the title of Justice League Dark, this film has been rated R and it leans heavily into the darker nature. This freedom of content allows the deaths of the Apokolips War to be more shocking and unexpected for their graphic nature. One would not expect the heroes to be shot in the face, mutilated into a bloody mess, or rips apart with guts and all. I write this not so much because it’s intense to see that graphic level of violence but it does stress a more grounded concern that not everybody will survive this story and often bite the dust in tragically horrifying ways. It also makes the few scenes where heroes actually come back from the dead mean that much more.

Apokolips War is not a perfect film in that it becomes lost in its epic swirl of all things DCAMU to ever-present something thematically resonant. While there are some tender contemplations on the nature of family and romantic love winning out against Darkseid’s mind control, it comes off fairly standard for how little time it’s allowed to simmer. That being said, it does offer a more palpable sense of loss when compared to the likes of the Flashpoint Paradox, where we tragically watch characters die off who we’ve only known for one film. Apokolips War builds up from 15 films to make the audience care a little more for the characters who are killed, carrying a similar level of heft seen in Avengers: Endgame.

There’s plenty going on within Apokolips War that it feels like the more accomplished DC movie for everything it builds upon. Compare it to the likes of Zack Snyder’s cut of Justice League, where the director really wants an R-rating and for Batman to say the F word. Cute. Apokolips War, also rated R, uses the F word at least five times and rarely as a punchline. Though a bit cluttered, this film manages to take a lot more risks and experiment with the comic book material whereas live-action productions are still in the paddling pools of going “adult.”