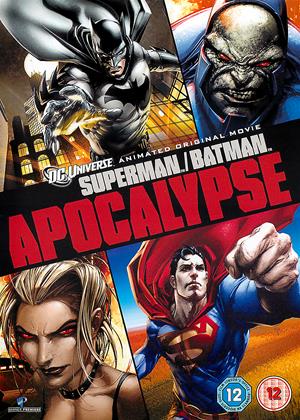 Superman/Batman: Apocalypse is easily one of the most distracting of the direct-to-video DC Comics animated movies for the art style alone. Batman and Superman are drawn in such an exaggerated design that conjures up an association with yaoi the way the characters have long shoulders, massive jaws, anime eyes, and lips so teeming with specularity it looks as though they’re always wearing lip gloss. The style makes for a rather confounding film considering it features some fantastic fight sequences.

The story ripped from the pages of the Trinity (Batman/Superman/Wonder Woman), follows Superman discovering and taking Supergirl under his wing. He teaches her the ins and outs of Earth after a rather rocky introduction when her starship crashes in Gotham. It isn’t long before she learns the lengths of her powers and the glory of hot dogs. Wonder Woman’s homeworld of Themyscira is sought as a better place for Supergirl to live but Superman is reluctant, having issues with letting go of someone so close to him. There’s an almost touching story here about Superman facing abandonment issues.

But then the story shifts greatly in the second half when the trio of Batman, Superman, and Wonder Woman is called upon to fight Darkseid on Apocalypse. Here, we get the standard superhero fights we’ve come to expect from the DC animated movies as a guarantee. Though to be fair, these fights are some of the strongest in the animation studio’s portfolio. The bouts on Apokolips and eventual war brought to Themyscira are epically staged and there are real stakes on the line when Supergirl becomes a pawn in Darkseid’s scheme.

However, it’s during the film’s third act that delivers the biggest surprise. Just when it seems like the film is over and everything goes back to normal for Clark Kent on his family farm, Darkseid pops up in the country to get his revenge on Superman and Supergirl in one of the most destructive and kick-butt fights ever animated.

I will say another plus of the film is being able to hear the familiar voice actors of Kevin Conroy, Tim Daly, and Summer Glau reprise their roles of Batman, Superman, and Wonder Woman respectively. They still haven’t lost their touch even if their lines are now coming out of over-the-top anime designs that are incredibly laughable in close-up moments.

This film is a severely mixed bag of exciting action, interesting explorations of Supergirl, and some of the most absurd drawings of DC characters ever put to film. If you can divorce yourself enough from the pronounced lips and come-hither eyes, there’s plenty of action coursing throughout such a picture that finds far more to harp on than the previous Superman/Batman feature of Public Enemies. It’s a picture that is by no means boring, whether you’re enthralled by one of the best Superman versus Darkseid matches of all-time or laughing at the character designs. Kudos for such an experiment even if not everything takes.