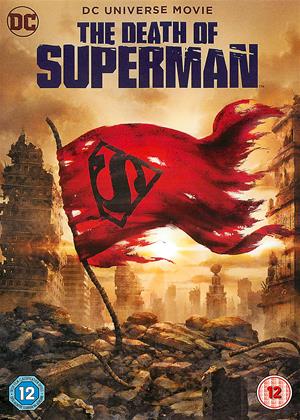 Reviews of The Death of Superman

The Death of Superman review by Mark McPherson - Cinema Paradiso

The landmark comic event of the 1990s was undoubtedly the Death of Superman run. Before death didn’t seem like a frugal benching of superheroes, having a comic book where the legendary Man of Steel bit the dust was a big deal. And it was a great comic series, the panels growing larger and more detailed as Superman’s demise drew near. It became national news. And it was such a stellar comic book run that I doubted it could ever be fully realized on the big or small screen. Yet DC Comics continues to try tapping into that emotional arc.

This isn’t the first time we’ve seen this story adapted. There was already a direct-to-video adaptation with Superman: Doomsday and bits and pieces of this story were present in Batman v. Superman: Dawn of Justice. Now, with a new design for the more serialized DC Comics animated films, the story is given a visual makeover. Superman looks different, the Justice League are more present, and even the villain looks like he’s been on a diet. And yet the film never quite finds its own groove.

The story remains the same. Superman is seeking to take his relationship with Lois to the next level by finally coming clean about who he is. Yes, Clark Kent finally takes off his glasses and urges Lois to take a more clear look at his face. There’s probably a better joke here but not for this rather earnest and milquetoast interpretation. But there’s a more pressing issue as a mysterious monster from outer space crashlands on Earth and starts slaughtering all those he comes across. Known as Doomsday, the creature goes on a bloody rampage; bears are ripped apart, Atlantians are torn to shreds, and cops are smashed and mangled. Even the Justice League find themselves outmatched by this threat. And when this spiked monstrosity can make Superman bleed, you know this is a real threat the Kryptonian may not come out of alive.

The Death of Superman goes about its tale in a rather standard, workhorse method. It is perhaps one of the more faithful adaptions I’ve seen, even for embracing the new wave of New 52 costume and character revisions. But how much more can we feel for this story that really only evoked the most emotions on the printed page? Even the animated series approach knew to match more with the emotions felt than the specifics of the story.

The Justice League once more provides backup in the supporting roles and to fill in the gaps of comedy but to what end? These films are already beholden to strictly low running times and getting them involved only decreases the amount of emotion we feel towards Clark and Lois, leading to their eventual tearful goodbye. As such, the inevitable climax comes off more standard than heartfelt. And should the death of Superman really feel so standard?

I find it strange how this new DC Comics series of animated VOD movies tries to bring out new stories and yet find itself treading territory too familiar. I couldn’t help but think about all the various animated depictions of Superman found dead and which ones were the most effective. I ultimately found myself more moved by the version in the Justice League animated series, where Superman was only transported forward in time by Toy Man’s ray. Not as stirring as being pummelled to death by Doomsday but the sense of loss was more present. I’d go so far as to say that even Batman v. Superman had a little bit more dignity than this. At least that film never felt the need to tease a follow-up film of Superman’s resurrection so sloppily as it was here. And that sequel happens to be an even sloppier excuse for reviving the Man of Steel.