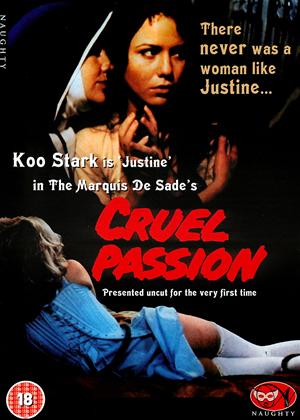 Sign up
The Ups and Downs of a Handyman

As a film, 'Cruel Passion/Justine' isn't easy to define. I went into it with no knowledge whatsoever, other than it starred Koo Stark, and was based on the story by the Marquis De Sade.

It is also impossible to review without spoilers, so beware - I knew nothing about what was to follow and found the ending truly shocking as a result.

It begins as a frightening type of 'nunsploitation' picture, which has become its selling point - rather misleadingly as it turns out. It then threatens to become a wild 'bodice-ripper', with a large segment set in an elegant brothel. This section features two extraordinary performances: that of Katherine Kath as exotic Madame Laronde, and also features the mainly dialogue-free, whooping Barry McGinn as George. What follows then is an excursion into low-life thievery and rape, featuring Louis Ife as Pastor John and Hope Jackman is Mrs Bonny. All of the performances are terrific, and the visuals have a look similar to Stanley Kubrick's 1975 period piece 'Barry Lyndon'.

Through this superficially elegant tangle drifts Justine, a virtuous innocent played beautifully by Koo Stark. In a kind of publicity ploy that mirrors the content of the film, Stark's brief nude shots and her infamy as one of Prince Andrew's girlfriends, have been used to bolster the production's reputation as an exploitation film - the truth is, it is a lot more than that (as a lot of films cynically placed under that banner have also proven to be). Justine's sister Juliette (Lydia Lisle), by contrast, accepts the fact that to survive outside of the convent from which they've both been jettisoned, she must whore herself. "It is the life I have chosen," she weeps as she is untied from the bed in the brothel, having been whipped by some particularly perverse client.

Whilst Juliette appears to otherwise survive her life with a degree of happiness, Justine's constant battle to retain her virtue throughout gets her into one scrape after another. Luckily she has handsome Lord Carlisle (Matin Potter) to aide her. Promised to Juliette, on whom she is depending, Carlisle nevertheless seems determined to help Justine survive the 71 run-time 'intactica'.

What we have to remember, of course, is that all men are b******s, and slaves to their desires. To that end, he bids the scarred and battered Justine to bathe in a lake, and then on seeing her nakedness, rapes her. This is a very bleak and unexpected development in a story in which the audience desperately wants her to triumph in her wish simply to survive. In further misery, underlining the 'cruel' in the film's title, she is then gang-raped by Bonny's menials, set upon by dogs (as is Carlisle) and hurled into the freezing river, where we see her floating away, lifeless.

It is one heck of a note on which to end the story, an unapologetically shocking development offering no hope whatsoever. Also, I get the impression the actors suffered here. Clearly filmed in the bowels of winter, the recording of these scenes cannot have been anything other than punishing.

All of this comes together to make a film that is so much more than its reputation suggests. True, there is flesh on display, but this is far from soft-core titillation. Nuns are held up to be just as hypocritical as everyone else with any degree of power, but this only forms a small part of the narrative. The real story is one of utter hopelessness, of a world controlled by the 'haves' who continually physically and mentally abuse the 'have-nots'. It is well worth seeing. My score is 9 out of 10.