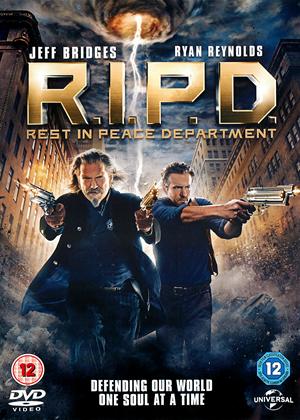 Take M.I.B and replace the aliens with dead people and the agents with dead coppers and you got the good clean fun of R.I.P.D. (2013).

I am not sure why RIPD garnered so much negativity, it may be generic and basically be Men In Black with demons but it is quite good fun. Jeff Bridges is cearly having a ball and the wonderful Mary-Louise Parker should be in more movies.

There are a few difficulties with believing this concept. The dead police officers can communicate with their living loved ones but they cannot initially communicate anything of their sorrow or regret. At the end, just to make it even more difficult to believe, they can. Once you've been dead a while you can soon spot another dead person in with the living is a bit too close to Men in Black's aliens but it is good fun and you will definitely chuckle at a few bits of silliness.

If you have one and a half hours to kill on a plane then this will be quite enjoyable. Ryan Reynolds and Jeff Bridges are both excellent in this film and only let down by the direction, cinematography and art direction. The films premise is fun but not enough time is given for Ryan Reynold's character to accept what is happening. The begging set up is shallow and the conclusion is so so; but the middle of the film is quite enjoyable for what it is, Jeff Bridges shooting a gun at dead people. This film has so much potential so maybe with a better director with a less jarring style and better special effects this my have been a good movie. This feels like a watered down, safe, studio friendly version of what we could have got.

OK, has loads of computer generated, but there is actually some dialogue and acting. Love Jeff films anyway. Has done so many good ones, right back to Thunderbolt and Lightfoot, passing Fisher King on the way with Lebowski, Kpax, Trons, etc etc. So many good films.

When the new Men in Black came out it was only a matter of time before someone decided to capitalize on the tried and tested formula it established as two partners stop crimes from supernatural creatures across a major metropolitan area. Sure that may be simplifying R.I.P.D, but not by much.

R.I.P.D follows Nick (Ryan Reynolds), a police officer who is killed in the line of duty but when he dies he isn’t transported to some magical place or a hellish nightmare realm he is dumped right back where he was but with a new job with new partner Roy (Jeff Bridges) working for the R.I.P.D, The Rest in Peace Department. Together the two must return dead souls that refuse to leave back to the grave while protecting the living. However when a dangerous plot emerges the two must defeat a force that threatens all realms.

While the film is an entertaining little romp through old sci-fi/fantasy cliches it never really learns from MIB’s flaws with an equally weak story tying everything together. Nick is a breathe of fresh air as the supposedly no nonsense police officer but a life of bad decisions makes for a nice added complication. The problem is Bridges who plays the same tired hippy layabout he has crafted for years but this time he puts no finesse into it, merely playing off parts of The Dude and Rooster Cogburn to little avail.

The finale kicks the film into high gear so I suggest sticking around for it but with a weak central villain, and a convenient one at that there is little conclusion to this action twister. The addition of Mary Louise Parker however as a sassy superior within the department makes for a few belly laughs that may or may not tide you over. All in all, R.I.P.D is an unconventional and at times fun journey but its nothing new and at times that point is abundantly clear