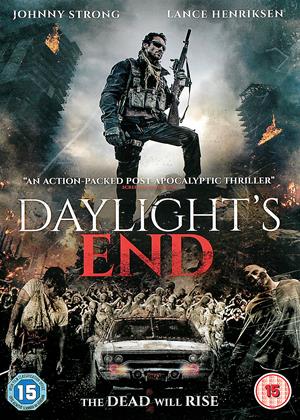 Nowadays, it’s pretty darn hard if near impossible to come up with a decent zombie flick, since the market is oversaturated with this genre, and the decreased demand for these kinds of films doesn’t help either. Daylight's End tries hard to provide a different twist to the zombie genre by combining the already known zombie conventions with those of a vampire. That becomes immediately clear after the opening scene wraps up, where Rourke (played by Johnny Strong) locates and retrieves an undead creature into some kind of a fridge. In fact, he retrieves it so well that the zombie itself becomes a smoldering piece of barbecue chicken.

Immediately after we get to know Rourke; he’s a loner who wanders across the United States in search of, well, nothing in particular. Rourke has only one thing on his mind: to survive and kill as many of these mutants as possible. To this extent, he’s comes off as a pretty resourceful guy, with his armored car and an extensive weapon arsenal that makes the S.W.A.T. team look under-funded.

Further, Rourke keeps track of his ‘killings’ by carving incisions on his rifle by the help of his sharp dagger. So, it immediately becomes clear that the filmmakers were going for a western zombie flick (not sure if those exist apart this one) set in a modern-day post-apocalyptic America. Did they succeed? Well, for the lovers of this genre (not gonna lie, myself included) – they sure did.

Now let’s be honest: Daylight's End is a low-budget flick, and it’s actually holding real nice for a film of that caliber. The cinematography is quite decent, the sets are well-made, and the acting… well, this is where Daylight's End falters. The only two worthy performances are those of Johnny Strong as Rourke and Lance Henriksen playing Frank. Now, the story.

See, the story is very much a derivative of the better zombie flicks across the movieverse, but what’s really puzzling are the numerous dumb decisions made by characters that don’t need to be that dumb. Granted, the script isn’t stellar either, so the whole trouble with this aspect of the film may very well be the screenwriters’ fault.

Then comes the action, which is repetitive, boring, and downright ridiculous at times. Like that time when an some ex-policemen barricades themselves in a police station and try to hold on for their dear lives; here the action seemingly never stops, as these guys are constantly attacked by zombies in what seems like an infinite survival wave in a B- videogame. But OK.

Finally, is Daylight's End worth seeing? Well, surprisingly, yes. More so for the lovers of this genre as well, and for those who seek for new cinematic thrills, this is some pretty darn good entertainment if you ask me.