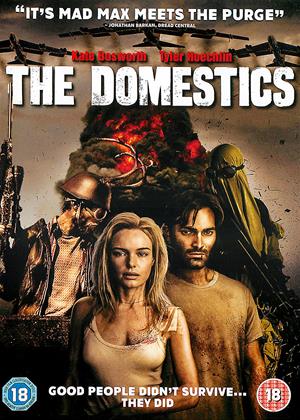 Reviews of The Domestics

The Domestics exists as yet another post-apocalyptic action picture that spends so much time enjoying the chaotic wild west style of a decayed future that it forgets to add a little something more than greasy whipped cream to its gritty cake of blood and bullets. And with the added aspect of rekindling a romance amid the desolate and dangerous midwest wasteland, the drive of the film’s central players seems to take a backseat to the drama and violence we’ve come to expect from this subgenre, intense as they still may be.

Nina (Kate Bosworth) and Mark (Tyler Hoechlin) have chosen the worst of times for their marriage to be on the rocks. 2/3 of the population in the United States is wiped out by a black smog. In just a few months, all of society goes to hell. Homes are abandoned, gangs of armored and masks killers roam the midwest roads, resources dwindle, and the radio still plays music but with a crazed DJ rambling on in a Hunter Thompson fashion about the end of the world. Now they make a trek across the northern midwest to find sanctuary, while also trying to rekindle their romance. Because nothing brings a couple together quite like an adventure of brutality and picking through the remnants of society.

While this premise could sound like that of a comedy, The Domestics plays itself straight with some of its tongue in its cheek. Mark and Nina have a run in with a gang Mad Max style raiders with goofy costumes and a shoot-first attitude. They’ll later meet a kindly survivor played by Lance Reddick who invites them over dinner but it’s no surprise that there’s a sinister motivation behind his smile. Sure, it’s Lance Reddick and he has that uncanny ability to seem warm and devious with ease but even if you can’t read that from him, the moment of when he reveals to Mark his true plans is so slowly divulged I grew antsy at how long it took for Mark to realize they weren’t eating beef.

They’ll later be targeted by a gang member with a grudge, a silent sniper with a newfound love for the couple, and be forced into a Deer Hunter style game of guns and betting. I do have to hand it to Mark and Nina, however; they take a LOT of abuse, including multiple gunshots, and always seem to come out fine in the end. Perhaps it helps that the warriors they’re dealing with are not as adept, better at spouting out vulgarities and screaming with bitterness than capable of any real strategy.

While I found myself getting very pensive with how middle of the road the film always felt with midwest version of Fallout, including a suburban community that seems to have done exceptionally well in the wake of an apocalypse, the third act finally started winning me over. The battle within a closed suburban community quickly turns into a chaotic fight of gun-toting raiders, exploding mailboxes, and a giant plow that blows up real good. It’s a surprisingly exhilarating moment for a film that seems to mostly go about the motion of a collapsed society, never fully embracing the rocky marriage aspect of Mark and Nina.

The Domestics never quite feels all there considering how much it throws at the screen and how much of it sticks. Mark and Nina’s relationship is not that interesting, leading to more pleasing divergent sequences as when Mark beats up a beefy giant while heavy metal plays. By the end of the film, I doubt its a spoiler to mention they reconcile their relationship but only out of a shrug when they realize their petty problems don’t matter when mailboxes are exploding and kids either being murdered or committing murders. Interesting lesson. Oh, another good lesson; you probably shouldn’t accept dinner from Lance Reddick when everyone wants to kill you.