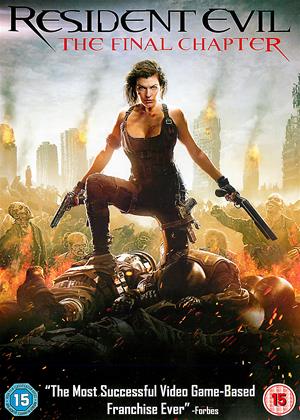 Rent other films like Resident Evil: The Final Chapter

Not the best entry in the franchise but entertaining as always . Nice to get a few loose ends sorted and great to see Ali Larter's character also makes a welcome return along side Alice for the finale . It ends back where it started in the Umbrella Hive under Raccoon City .and all is explained ,the How, Why and Who. rather sad to see it all come to an end really. like saying Goodbye to an old friend . Goodbye Alice .

Like it or not, this is one of the highest grossing film franchises of all time. I actually found this better than people are saying on here. Action is good. I guess it maybe doesn't tick the box in the scares department. It is a shame they blew away all the former characters barring Wesker, Alice and Claire - but I thought finishing the series (which actually has 6 films as far as I know - not as described above) in the Hive back in Raccoon City was a masterstroke. There is a story but it is a bit weak. They do bring in a few new creations and concepts though so its not all re-hashed.

I did like the doctor villain from the 3rd movie but it was pretty silly to resurrect him. And it was a shame we never got to see the Wesker / Alice scrap the fans were really waiting for.

Personally I didn't like the opening. If they could have played out some of that battle on the White House "lawn" that would have been ace, but due to budget constraints they obviously wussed out of that idea. Not a patch on any of the other openings which included the slow-mo reverse sea tanker attack if you think back.

No I can't see them making any more. It's done and the conclusion was satisfactory in my view.

'Her name was Alice'. 'And [now] she remembers everything.'

This was ok , better than the last one but still not good enough to really enjoy it. I think it was dragged out over too many films . The first two for me were the better ones .

the final - Resident Evil: The Final Chapter review by ld

Surprisingly boring, even for a series fan. - Resident Evil: The Final Chapter review by BG

I've been into the Resi films from the beginning, and although they're not Oscar-winning stuff, each movie's usually good for some daft unpretentious fun. Movies are escapism, and there's nothing wrong with that. Although the quality of the writing and characterisation (except 'Alice') has gradually fallen, each of the movies has also tended to have one or two stand-out scenes that stay with you. Scenes like the killer dogs in part 1. The reveal of Nemesis in part 2. The killer crows in part 3, or the shower battle with the massive Axeman in part 4.

It's telling that I can't remember anything like that in this episode.

It's not that I'm tired of the series - Jovovich remains brilliant fun as series hero Alice, and the visuals and stunts remain terrific. However the series seems bored of itself. The episode is shot in such a frenetic, choppy style that it's frequently hard to see what just happened in action scenes. It also becomes very uncomfortable in 3D, which doesn't react well to extended bursts of stark lighting and rapid-fire camera cuts - a marked difference from the terrific 3D of the fifth film.

The directing relies massively on slow-mo...but worse, relies so heavily on tricks from earlier in the movie series that the entire film becomes drudgingly predictable. A trap with a motorbike feels heavily reminiscent of 'Extinction', and then merges into Daniel Craig's inverted gunfight from Quantum of Solace. Some characters come back to life so many times that it becomes boringly ridiculous. Events from the second film 'Apocalypse' are directly referenced, but then pivotal characters from that film are ignored so the series can make a whole new person the inventor of the T-Virus.

I don't mind a few daft changes, but if a series can't even be bothered to respect its own plot, it's hard to get excited. The film even steals a trick from Guy Ritchie's second Sherlock Holmes movie about characters pre-visualising fights (which was pretty boring in the Holmes film to start with) - and then conveniently forgets it five minutes later when a character needs to get beaten up.

The list of 'can't be bothered with continuity or respecting the audience' goes on and on and on. The last films took a few inches. This takes miles. More miles than the runway in Fast & Furious 7.

Worse? Wesker's back. The weakest character from the last few movies gets even more screen time, and continues to be a Matrix clone so blatant I'm amazed they haven't sued.

And the fights go on and on and rely so much on the same tricks of flips and slow motion and kicks to the face that it starts to feel as repetitive as watching Michael Bay do slow-motion robots diving over people in the Transformers movies. I've never been genuinely bored in a Resi action scene before. Here it set in about 40 mins into the film.

An attack by an intimidating quantity of gnarly-looking hounds is nicely tense.

Alice's memory gap is explained in a fun way.

And the visuals remain eyecatching.

There is enough here to just get you to the finish line. But this NEEDS to be the final episode. This is a film series that has now ceased to be Alice, and has become the zombies: - utterly brain dead and without purpose, but still moving.

“It’s over, it’s done”, paraphrased Frodo as he and his friend Sam witnessed the final instalment of the boringly epic train-wreck of consecutively worse films in a franchise that was creatively done some long time ago. Up to this point, the films actually had something that resembled a plot, but all of that is thrown away to introduce the shakiest of shaky cams into the mix. I’m not saying this to cast an unforgiving shade over Resident Evil: The Final Chapter; I’m saying it because, in this day and age, the hardest thing for one to do is to remain intellectually honest to themselves (in all manners possible). And so, the final chapter of the Resident Evil saga has come to an, in a surprise to no one, its befitting end.

Let’s address the latter part of this film franchise for what it is: a begrudging cash grab. Which does not equal a foul – as long as there’s someone who’s willing to pay money to see these kinds of films. Everything that one can expect from the Resident Evil film franchise is ticked: car explosions, shaky cams (too much even for my taste), weak protagonists (either super strong or terribly weak), subpar villains, no sense of pace, tone, editing, direction, spacing, and all of those little details that make a movie not suck. To clarify, Resident Evil: The Final Chapter has none of that, but hey, at least Mila Jovovich is a beautiful woman, so there’s that.

As far as visuals go, the film has something going for it; they’re slick and modern-looking, nothing fancy or out of the ordinary. The problem is however the majority of the CGI scenes are competently shot, but the editing of those same scenes feels somehow rushed. Not Transformers: The Last Knight kind of stroboscope-y, but damn close if you ask me.

As far as characters go, there’s only the one of Mila (playing Alice Marcus), but that’s only because the writers had several movies before to establish her arc. The other ones: meh. Some of them were killed off, some survived, but at the end it didn’t really matter since the filmmakers (Paul W.S. Anderson mainly) chose to leave out room for growth. And by room for growth I mean a desire from their fans (by this point you have to be a hardcore fan in order to watch these films) to come back for more. A reboot maybe?

All things considered, Resident Evil: The Final Chapter is not what you’d call a good film. Sure it has its moments, but those are far and few between for the audience to really care by the point the curtains roll. As said, recommended ONLY for fans of the film/games franchise; everyone else, enter at your own peril.