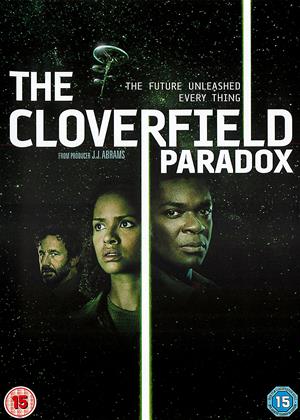 Reviews (6) of The Cloverfield Paradox

One of those films that you keep expecting to get better, but actually gets worse. You would be advised to give it a miss.

The earth’s running out of resources and it’s up to a space station crew to come up with a particle accelerator that will produce unlimited energy. The problem is, it could open up a rift in space-time that would cause parallel universes to crash into each other. This is the third film in the “Cloverfield universe”, the premise of which is that anything can happen… and things certainly do start to get weird.

Unlike in lesser space action movies, the crew are not made up of morons. Characters, plot and dialogue are all refreshingly intelligent, so we stick with the cast when things start to go wrong. Okay, so there’s nothing new here… apart from exploring parallel universes... but the plot is pacey and the time whizzes by. Quantum entanglement, anyone? A worthy third entry in an interesting franchise and the DVD has a fascinating “making of” feature.

Bunch of dull characters in a space ship use a McGuffin that goes wrong. Then one by one they start to get killed off as they try to work out what's gone wrong and come up with a solution. In the process the film overlabours the SF concept as if the audience is stupid, which means the film doesn't have a great pace and then rips of scenes from a whole bunch of much better movies. This means, if you've seen any of these films you know exactly what's going to happen next.

The pace is slow, the acting wooden and the shocks predictable.

Alien, Aliens, Hellraiser, Gravity and Event Horizon are much better than this bilge. Go watch them instead.

It is a vital mission to save Earth, but everyone acts with deep malice to their colleagues.

In the face of each crisis, they react with total hysteria.

And they are amazingly slow to work out where they have been moved to. Elementary astronomy would tell them that.

Likewise the bloody obvious explanation for why a mysterious stranger claims to know some of them.

About as stupid as a gigantic fleshy monster that does not collapse under its own weight. Tacked on at the end and without logic.

A very entertaining science fiction film set a few years in the future where the Earth's energy supplies are almost exhausted and international tensions are spiralling towards a major war. A huge orbiting space station, the Cloverfield, has been launched that contains an experimental device that could solve all the world's energy problems. But test firings of the device keep failing. The small scientific crew try to rectify the problems in a race against time and unwittingly cause a rift in the space/time continuum and find themselves trapped in a parallel universe which threatens their own as well as the one they are now in. A clever story that links the other films in the 'Cloverfield' series although you don't have to see any of the other films to really enjoy this as it's a stand alone story. If you enjoy sci-fi of the likes of Event Horizon (1997) and Alien (1979) then you will definitely enjoy this. It's has some great effects and an intricate plot which keeps you thinking throughout especially as it concerns the idea of multiverses similar to each other but with significant differences. There's some shocks along the way and the script adds in some good humour to soften the horrific elements. The great cast of Gugu Mbatha-Raw, David Oyelowo, Chris O'Dowd, Daniel Brühl et al makes for a very enjoyable space film.