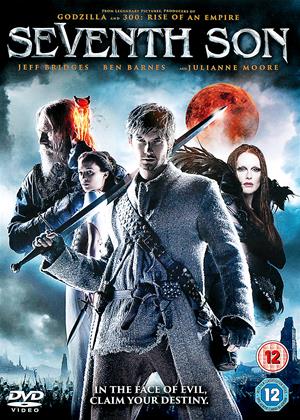 Not my thing - Seventh Son review by JD

I really don't think I ordered this. Dragon slaying with witches and wizards is more of a teenagers thing. If you like magic and fantasy heroes this may be for you.

Everyone connected with this ridiculous sword-and-sorcery fantasy, from the writer to the cast, seems to realise it's a load of nonsense so they might as well go for broke. The result is an unexpectedly entertaining feast of hokum and mayhem with a nice Gothic atmosphere. Master knight Jeff Bridges hams it up with an impenetrable accent. Julianne Moore matches him as his dragon queen nemesis. Ben Barnes does his best as Jeff's bland apprentice who must learn how to fight evil (yawn, yawn). Sergei Bodorov provides snappy direction with colourful, panoramic vistas (the British Columbia locations are stunning).

There are some fun special effects and silly creatures such as the blind but persistent boggart. Jeff's despairing cry 'We're having a boggart problem!' deserves to become a generic catchphrase.

What's it about? Who cares? None of it makes sense so just sit back and enjoy the mayhem. An instant late-night cult classic.

Seventh Son is a hefty splattering of fantasy action once more built off a young adult novel series. Is that even a surprise at this point? Every studio wants to have the next Harry Potter franchise on their hands and just makes mad dashes for book series. This is one of the largest book series to target with about 13 entries in The Wardstone Chronicles. That’s far too ambitious for Universal. I do have to give them credit for not tacking on a colon title to imply there would be sequels. Even if sequels come to pass, I highly doubt they’ll ever make it up to Seventh Son 13. I’m sorry, I meant Seventh Son 13 Parts 1 and 2. I forgot that’s the hip trend with young adult book series turned into films.

Jeff Bridges stars as the cranky old Master Gregory, the last of a knightly order known as Spooks. His mouth once again concealed in a beard, Bridges plays a more pompous elder warrior with his lips pouted speaking as if there is something constantly in his mouth. A blood moon is coming and with it brings more power for his old flame turned witch Mother Malkin (Julianne Moore). After losing another intern to her magical powers, Gregory needs a new apprentice. For whatever strange reason, it needs to be a seventh son born from a seventh son. That seems to be the lucky number for fruitful prodigies as Tom Ward (Ben Barnes) starts coming down with a case of the Dead Zone, dreaming of Gregory before his visit and his love interest before she appears later on.

After the obligatory mother-sells-her-child scene, Gregory begins training the plucky yet bland Tom in all the arts of fighting witches and evil creatures. He schools him on all the various creatures they will fight and how to fight them. But it’s going to be a complicated battle as Tom begins to form a secret love affair with the teenage daughter of with Malkin. This is all fairly standard plotting for a plot that is mostly about a master and apprentice slaying beasts and trading action cliches. Such old chestnuts are dusted off as when Tom fails terribly at throwing knifes until he grows frustrated and throws one just a few inches short of Gregory’s face (“I was aiming for your head.”). There’s an old-fashioned charm to their student-teacher relationship even if it really is Jeff Bridges carrying the bulk of the fun.

The pair actually do have some interesting foes to fight. A four-armed warrior dons his swords to do battle with multiple enemies at a time. Djimon Hounsou appears as a noteworthy foe for how he swings around fire-engulfed chains when he’s not transforming into a vicious dragon. While on the road, Gregory and Tom flee from a giant beast that knocks over their ride and hunts them down. The two plunge off a cliff into a river with Gregory remarking how this particular baddie is afraid of water. To his shock, the beast still jumps in the water after them. While these all feel like standard and tired elements of a fantasy adventure, they are at least competently shot and entertaining enough to spawn a smile if not a large one.

Worth noting is that this is the first time Jeff Bridges and Julianne Moore have been reunited since The Big Lebowski. Look how far they’ve come, starring in such a simple script that is doomed to be obscured by its winter release (which only came after two changes in date). That being said, they are by far the biggest highlight of the film. Bridges is perfectly suited as the know-it-all senior warrior who still has plenty of intelligence and wit in between his drinking. He may be playing up the role a little too silly, but that’s the level you have to go towards with a fantasy film so standard. Moore slips into the role of an all-knowing witch with ease the way she cackles and grins devilishly at her mortal victims. The two actors are thankfully given a romantic backstory so that we can have a few scenes together with them.

Seventh Son is a pleasant slice of fantasy action, despite being rather by-the-book with its tale of dragon slaying and witch burning. The dialogue is cliche, but brisk enough to never be overbearing. The fights are heavy on the computer graphics that don’t always look stunning, but they’re staged well-enough given the wealth of creatures thrown at the screen. While I don’t see a future for this novel series on the silver screen, director Sergei Bodrov can rest easy knowing he turned in a film that can hold its own without the need for a sequel. That’s more than I can say for these other fantasy films series which have become far too ambitious with setting up a new movie series, but never advance past one or two films. Seventh Son does a decent job using its material to create something light, energetic and complete. It’s certainly not one of the best fantasy films by a long shot, but it’s a mostly harmless bit of fun that provides some simple entertainment. For many, Bridges playing an alcoholic witch hunter is enough of a selling point (maybe its only selling point).