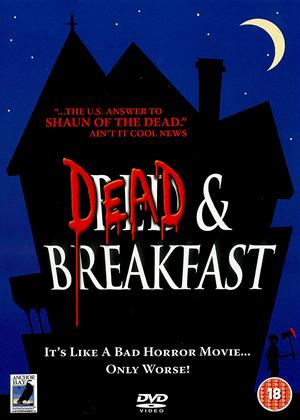 Reviews (2) of Dead and Breakfast

'Dead & Breakfast' is a strange film, a weird mix of gory grindhouse style horror, witty comedy, peppered with musical numbers from singing hillbilly zombies which all together shouldn't really work, but the end result is surprisingly good. The dialogue is sharp and witty, the acting is well above average for this type of film, the direction is polished and well paced and the musical numbers are genuinely funny. Overall this is an inventive tongue in cheek horror film with buckets of gore which should be on any horror fans rental list. If you enjoy this then you should also check out the equally good comedy horror 'Idle Hands'.

It's a sort of country & western zombie comedy. The story (such as it is) is interspersed with songs - the one that plays over the end titles includes the lines:

Well, this used to be such a quiet little town

We never had too much trouble around here

Until that spirit was released

And we were haunted by the deceased

And that's about it... Three couples en route to a wedding are forced to stop overnight in a creepy B&B and meet David Carradine (he of 'Kung Fu' fame + 'Kill Bill' + lots of very dodgy minor roles, including this one, made a few years before his death in 2009). He has a small wooden box, that when opened releases the Kuman Thong, a spirit which will (of course) possess you and turn you into (of course) an unkillable zombie. And (of course) the zombies can only be destroyed by removing their heads. Cue many buckets of blood, fountains of blood, pools of blood, and assorted weak attempts at humour, with zombie dancing and a few amateur country & western numbers thrown in for good measure.

It starts off slowly, but the last half does have plenty of gore and is mildly amusing, with occasionally an inventive way of seeing off a zombie or two. Unfortunately it's a pretty poor attempt at a zom-com but isn't so bad that it falls into the 'so bad it's good' category.

I didn't hate it, so I'll give it 3/5 stars - but only because I've seen so many worse than this.