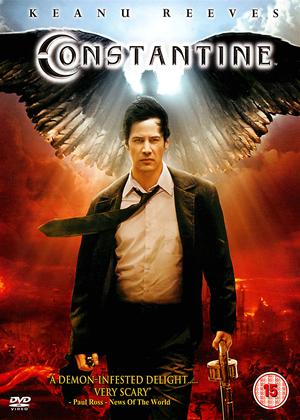 One hell of a movie! - Constantine review by CP Customer

Based on the DC Comic Hellblazer, 'Constantine' follows the exploits of John Constantine, a chain smoking world weary man who uses his powers as a mercenary exorcist in Los Angeles. After a brief visit to Hell, having committed the mortal sin of suicide before being brought back to life by doctors, Constantine spends his time trying to redeem his damned soul by sending earthbound demons back to Hell. Recently diagnosed with terminal lung cancer, time is running out for him to get back into the good grace of God. His supernatural activities bring him into contact with Angela Dodson, a police officer whose twin sister recently committed suicide. Dodson suspects some sort of foul play is involved with the death of her sister, and Constantine reluctantly is forced to agree when he notices a high amount supernatural activity in effect, realizing that the balance of supernatural power on earth is starting to shift toward the dark side. First time director Francis Lawrence cranks up the action with a clever, if slightly over complicated story, some amazing special effects, and a superb cast. Keanu Reeves plays the role of John Constantine quite convincingly, and manages to take a selfish, narcissistic character and make him quite sympathetic. Rachel Weisz, while she does give the character of Dodson some much needed angst, is trapped in a stock supporting female role, and isn't given much scope to bring her character to life. But it's really Tilda Swinton as the androgynous angel Gabriel, and Peter Stormare as Satan who really steal the show. All in all, Constantine is an exceptionally well made film and a cut above the usual comic book superhero movie. P.S: make sure you watch through the end credits, there is a final extra scene at the end!

Best Of Its Kind - Constantine review by CP Customer

This film is very different from others such as Devil's Advocate and others. The main character is far from perfect and nor is his world. Despite being about a dark subject, the film itself isn't dark (I didn't think). It had excellent special effects and the story kept moving. I liked the film because it was so different than most mainstream films. Very enjoyable watch and a nice surprise

John Constantine is a sort of occult detective + exorcist. That should give you a feel for what this film is about and coupled with the fact that it has 'wooden' actor Keanu Reeves in the lead and also includes the extremely boring Shia LaBeouf in a minor role, should give you some idea of just how good it is. And no, it isn't good - it's pretty bad. But the effects are OK...

Brit actresses Tilda Swinton (as an androgynous Archangel Gabriel) and Rachel Weisz are the best things about it - but frankly they just seem to be there as a sop to the British-written comic book character of Constantine. He first appeared in 'Swamp Thing' but the storyline in the film is (very loosely) developed from 'Hellblazer' and more specifically, the 'Dangerous Habits' issues. 'Dangerous Habits' is a tongue-in-cheek reference to Constantine's constant smoking, which has led to terminal lung cancer.

If you're in the mood for a supernatural action thriller, compete with angels, demons, heaven and hell, God and Satan, mixed with a little irreverent dark humour, then this might be for you. If you're a fan of the comic books then it probably won't be for you. It wasn't for me - I'm not even sure why I rented it - it's utter tosh.