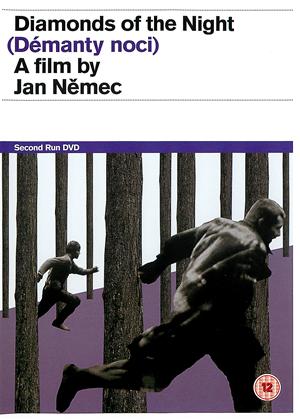 Reviews (1) of Diamonds of the Night

With the advent of the talkies, cinema lost something at first. They were often far too, well, talkative; composition was lost as filmed theatre held sway. In a while the virtue of selective sound was understood - and every now and then such films as Silent Movie and The Artist have shown that there can be a substantial audience for a silent movie. Diamonds of the Night (1964) is unlikely ever to pack 'em in but its influence these past six decades has been has been quietly considerable.

It is not exactly silent. There are perhaps a dozen lines of brisk Czech dialogue in its hour, and many a sound of gunfire and other noises on the air (where else are noises?). Directed by Jan Nemec (his first film), it was adapted by him with Arnost Lustig from the latter's novel, which was based upon his own wartime experiences.

Two teenagers (Ladislav Jansky, Antonin Kumbera) are heading for the wooded hills, ducking bullets and the usual absurd calls of “halt!”. One is already injured; hobbling, he is aided by the other.

It emerges that they have escaped from a wagon train on its way to a concentration camp. The great success of the film is that a chase up a hill becomes something much greater, for it cuts to and fro in time - back to that hellish train and, so it seems, forwards to escape. As with so much of the Czech new wave, there is a blending of reality and fantasy, the wonderful black and white cinematography becomes, every now and then, a bleached-out cityscape suggestive of delusion under fire. Harrowingly real, it is also surreal, with a Bunelesque use of ants consuming a foot.

No shot (filmwise, that is) lasts long. Here is a masterclass in editing, partly the work of Miroslav Ondricek who was later to work with, among many others, Lindsay Anderson whose own combining of fantasy with gritty takes on contemporary life owed much to his Czech studies.

To say how all this turns out would be unfair - even if one knew. Suffice to say that here is a film whose wartime hillside bears comparison with that familiar from La Grande Illusion.