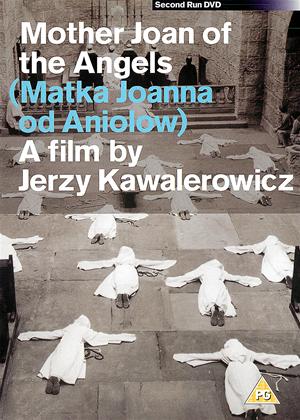 Synopsis:
One of the landmarks of Polish cinema, this film is based on the documented story of the 'possession' of a group of nuns that led to the burning of a priest at the stake in Loudun, France in 1634. Mother Joan of the Angels is a spare, visually rigorous, and profoundly disturbing exploration of faith, repression, fanaticism, and eros. Anyone who is a fan of classics of the strange will find much to savour in Mother Joan Of the Angels.
Actors:
Lucyna Winnicka, Mieczyslaw Voit, Anna Ciepielewska, Maria Chwalibóg, Kazimierz Fabisiak, Stanislaw Jasiukiewicz, Zygmunt Zintel, Jerzy Kaczmarek, Franciszek Pieczka, Jaroslaw Kuszewski, Lech Wojciechowski, Marian Nosek, Jerzy Walden, Marian Nowak, Zygmunt Malawski
Directors:
Jerzy Kawalerowicz
Writers:
Jaroslaw Iwaszkiewicz, Jerzy Kawalerowicz
Aka:
Matka Joanna Od Aniolow
Studio:
Secondrun
Genres:
Drama, Horror
Countries:
Poland, Drama, Horror
Awards:

Rent other films like Mother Joan of the Angels

Reviews (2) of Mother Joan of the Angels

I would say that this film is a fine foray into cinematic chiaroscuro. Filmed in black and white and shot with enough close-ups to make Greta Garbo happy, we do have a masterpiece equal to the German or Danish offerings of the 1920s and 30s.

Father Joseph is sent into the monastery to investigate allegations of demon possession by a group of nuns. I assume Kawalerowicz has used Poland as his setting of choice rather than France and really it makes little difference to the plot. The nuns are beautiful in their new-found 'excuse' to find freedom in movement and expression. One can easily see the psychological ramifications of repression and cloistering if one isn't prepared for anything else. Forget gender issues here because we are stripped down to the questions everyone asks, 'What is of God and what is just our human nature'? Does prayer affect anything? Who can we trust; ourselves or authority?

Lucyna Winnicka and Mieczyslaw Voit are splendid as the lead actors and the scene between Fr. Joseph and the Rabbi is an excellent Dostoevskian play twinning play on philosophical discussion.

If you like arthouse cinema, I recommend it. If you like your movies in color, without sub-titles, and with a lot of action, you'll of course hate this film.

Devil Of A Film. - Mother Joan of the Angels review by NC

The supposed demonic possession of nuns in a 17th Century Loudun convent doesn't appear to have ceased being discussed, debated and transformed into scholarly and imaginative works. In the 20th Century two books, a play, an opera, and two films attest to the way it still appeals to the creative mind. 'Mother Joan' is the first, and immeasurably greater, of the films (Ken Russell's flamboyant 'The Devils' being the later). From the very first shot of Father Suryn prostrate on the floor, in the form of an inverted crucifix, we are treated to photography, imagery and choreography which have surely never been bettered. Figures in a stark black-and-white world of good versus evil.

Kawalerowicz clearly thinks factors other than the battle between God and the Devil were involved. The isolation of the convent, perched on a hill, a barren land surround, with no other building save an inn - where the goings-on are the very opposite of life in an Ursuline house. The relentless suppression, religious and sexual. The burnt-out pyre and stake, outside the convent walls, as a reminder of what happens when someone steps out of line.

It is easy to understand that Kawalerowicz, living through a stormy Polish history, knew about repression and the 'taking over' of souls by demons, and so would attribute a human rather than a supernatural cause to the event.

The script (Tadeusz Konwicki) and the acting are as good as it gets.

So why does it not merit five stars? The film's depiction of women leaves a faintly sour taste in the mouth. Not just the sexually repressed nuns, but the one non-nun, the landlady of the inn, is a vamp and assists in the squire's nasty deflowering. The ending too is inconclusive and unsatisfactory. Nevertheless, this is a great film. The scene where a line of nuns in brilliant white emerge one by one out of pitch darkness ranks as one of the greatest things I've ever seen on a screen.