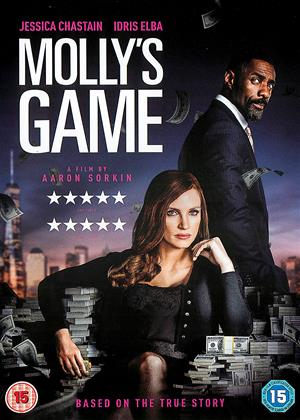 Really well made movie, even if I did not understand all the “poker jargon”, it didn’t really matter as it was such a great ( true) story.

Jessica Chastain and Idris Elba are both superb and the complex legal fight towards the end is very well staged.

I loved the movie, and I think Jessica is the most talented actress around now.

Was looking forward to this film but one thing I cannot stand is narration throughout a film.

Watched for a time then turned off.

Could have been so much better without constant commentry.

A watchable and mainly entertaining film that moves along avoiding too many dull moments. For me though it never builds any tension or drama and ultimately lacks pace . Additionally, few of the characters portrayed demonstrate much in the way of personality or interest, with the notable exception of Molly herself. That said it entertains, is well put together, easy to watch, but, it hardly challenges one's intellect.

A smart film which carried the viewer along at a fast pace without necessitating the need to know anything much about poker. The acting was great and the characters (and their relationships) were plausible and interesting. I liked the commentary and I enjoyed the story in general.

Disagree with the negative reviews for this film. Engaging story with excellent acting. You don't need to know the mechanics of poker to enjoy the film. We thoroughly enjoyed the film and felt sympathy for the lead character from the beginning. Would recommend completely.

I love Aaron Sorkin's work, and have done ever since the West Wing. This has smart, sassy characters, saying smart sassy things, and weaves a complex plot in and out and around, keeping the viewer engaged and intrigued

Apart from a few fairly noteworthy scenes with Idris Elba and Kevin Costner, my one, or should I say two, lasting memories of this quite ordinary movie are in my review title. Some of the verbal exchanges are satisfying but this is a Aaron Sorkin film.

Suppose have to go for a 3 as Idris is good in it.

Supposedly based loosely on fact........bit like the drugs films, like Blow, tends to make heroes of people that make huge amounts of money out of criminal rip-off activities that ruin thousands of lives and families.

Jesse James again. He was a very nasty criminal. Billy the Kid shot people in the back, from a distance, with a rifle, then robbed them.

This lady scammed millions from an underworld activity including/using drugs and prostitution. The film then sets her up as some laudable example of how to pick yourself up, and make free money.............the American Dream!

All these films are about nasty people..........entertaining perhaps, but good role model??

Read the book instead - Molly's Game review by Alphaville

In director Aaron Sorkin’s own words, this is ‘a poker movie’. If you don’t like poker, give it a miss. If you don’t like incessant voiceover, give it a miss. Molly is a poker hostess. Her prattling, quick-fire voiceover, telling us everything we’re watching on screen, is a pain. Sometimes it’s more like listening to an audio book than watching a movie. Sorkin has previous in this, as a writer on The West Wing, but while verbosity may work on TV it rarely does on film.

Another mistake is having the film’s structure alternate between a present-day court case and flashbacks of how Molly got there. This is never a convincing plot ploy. Giving the end game away merely makes the flashbacks predictable. There are even further pointless flashbacks to her childhood with her father. One suspects the script stays too loyal to the real-life Molly’s autobiography. The poker-game flashbacks zip along pacily enough if you’re interested, but the whole film lacks drama and amounts to little.

Sleek, flashy and empty. There is some smart dialogue but any momentum is killed stone dead by the clunky reliance on flashbacks.

It gives a peek into a horrible world of spoilt rich people with colossal egos who inhabit a hermetic world of super-exploitation.

Strong acting, crackerjack dialogue (as you would expect) can't hide the fact that the sum of its parts is less than its whole. Do we really care about the characters? I didn't, but it's a slick movie asking you to root for characters that are basically sleazy.