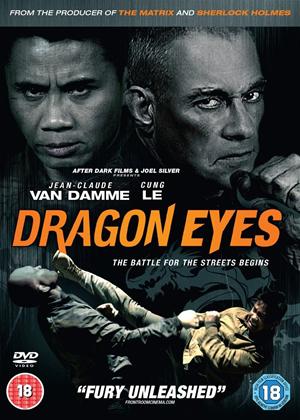 Former Mixed Martial Arts (MMA) champ Cung Le shows his acting and karate chops in ‘Dragon Eyes’ directed by John Hyams (‘Universal Soldier: Regeneration’) with screenplay by Tim Tori. In it Le plays the mysterious Hong, an ex-con who wants to do right by cleaning up the streets of St. Jude Springs, a virtual gangland with gangsters who love to use chains, pipes, and crowbars as weapons. Hong will also have to contend with the local kingpin only known as Mr. V (‘Robocop’ himself, Peter Weller), but when it comes to getting rid of a town heavily-ingrained in crime, Hong has a lot to do. This is ‘Dragon Eyes’ and if you want a whole lot of action even without a plot, then this is the movie for you.

‘Dragon Eyes’ knows it’s not about making a groundbreaking action movie; it does make MMA champion Cung Le as its breakout star. Though not as A-list as fellow MMA champ Gina Carano in ‘Haywire’, Le ‘s B-movie debut is still a feat in itself. Le is in the lead and would you believe it, co-star Jean-Claude Van Damme agreed to be in a smaller role. But it doesn’t diminish Van Damme’s badassery at all. In ‘Dragon Eyes’, Van Damme shows up in flashbacks as Le’s character Hong’s mentor while in prison. Even with just fleeting sequences, Van Damme shows off his very own martial arts skills which made him a formidable action star in the 90’s.

It’s unclear why the ex-con Hong is so adamant in ridding the small town of gangs and criminality; there’s no character background to explain to us. But at least he tries – even if the consequences are grave and violent. Peter Weller as the crime lord Mr. V is campy-perfect, making sure that we don’t forget he is indeed an underrated character actor.

‘Dragon Eyes’ sure is nothing new but at least we get to see Cung Le in action, MMA-style. Lately, audiences demand for action without cuts and fortunately, there are former MMA champs out there willing to receive the blows and even give them.