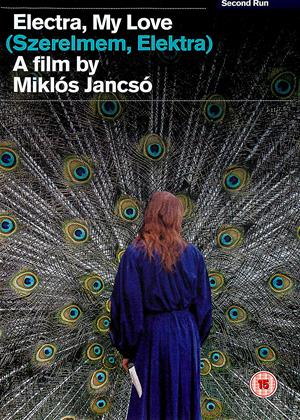 Reviews (4) of Electra, My Love

Only the 4th I’ve seen from prolific Hungarian director Miklos Jancso although his films can be difficult this was pretty much a breeze to sit through once you become familiar with its Hungarian settings and the wonderful symbolism thats on show.Its rise and fall of a tyrant story is told with little dialogue but told more within its fine use of expression and movement, it’s striking to see it unfold especially from the brilliant way its background and foreground performers all in perfect sync utilise some really fantastic choreographic movements, the way the camera glides in and out following these players is nothing short of brilliant no wonder its acclaimed for its groundbreaking use of tracking/zoom shots and for it's extremely meticulous long takes.Pretty much essential viewing for anyone interested in Jancso’s works.

Other rec’s ...The Round-Up,No Way Home,The Red and White.

This was my first experience of Miklos Jancso, and it was a like going on a slightly awkward first date where you come away feeling unsure if you want to see the other person again or not.

I can see that there is much to admire from a technical point of view - the long takes, the meticulous choreography etc - but I keep asking myself if I actually felt anything when I watched it. If I am honest I think the main thing I felt was a little bit of boredom, even though the film is only 70 minutes long. It is a highly formal, intellectual film with a didactic, polemic message regarding the need for violent revolution. I think that its focus on the political rather than the personal kept me at a distance - I generally have a preference for films about the minutiae of life rather than grand, sweeping ideas. I would find it easier to respond emotionally to a film about individual experience within an oppressive political regime, whereas this is more of a universal, ideological depiction of oppression and revolution. On the other hand, I find myself thinking that if I had seen something similar in the theatre I may have responded more positively... Maybe there is something about this formal, choreographed, declamatory style that I feel 'belongs' in theatre and not in film. Maybe I am just not yet attuned to Jancso's methods and vision.

If I had outright hated the film it would be much easier to dismiss, but I didn't. The image of the red helicopter appearing in the hitherto timeless landscape is undeniably striking and the last ten minutes, during which the message is made rather more explicit than in some of the opaque earlier scenes, did to an extent bring the film together and give me enough clarity to suggest I might benefit from a second viewing. Then again, maybe I am just trying too hard to like something that just isn't to my particular taste.

I think I have some more Jancso films on my list, so for the time being I don't think I'll call him for a second date but I'll probably see him around, and we'll see what happens.

Rather affectedly trying to mimic the original from the 'Oresteia'. It has some memorable images but the choreography is somewhat pointless and the translation is prosaic and flat. Not a successful rendition. The National Theatre production with masks and percussion ensembles is much more intriguing and powerful.

I've never been tempted to write a review before, but this film has to be commented upon.

Wow! Never during the wild seventies did I ever see anything as crazy as this. It’s full-on wacky pretentions are a time capsule, it took me all the way back. Made, I’m sure with the best of intentions, its seriousness is way beyond anything from Private Eye’s, Pseuds Corner.

You’ll marvel at it’s imagery and inventiveness. You may have to watch it twice, just because you'll be amazed the first time and then again to catch the all subtitles.