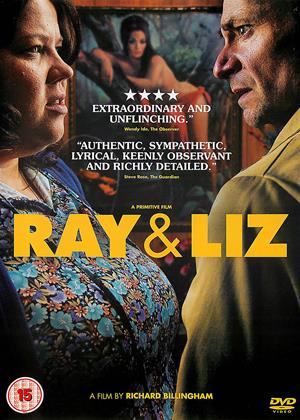 Synopsis:
The renowned photographer Richard Billingham made his feature-film debut with this intricate family portrait, inspired by his own memories of growing up in the West Midlands in the late 70's and early 80's, and then of his father and mother in the late 90's. Billingham revisits the figures of his earlier photographs - his alcoholic father Ray (Justin Salinger / Patrick Romer); his mother Liz (Ella Smith); and his younger brother Jason - with a series of family vignettes where life, lived on the margins of society and societal taboos, can spiral out of control.
Actors:
Richard Ashton, Jamie-Lee Beacher, Michelle Bonnard, Sam Dodd, James Eeles, Sam Gittins, James Hinton, Andrew Jefferson-Tierney, Patrick Romer, Justin Salinger, Ella Smith, Tony Way
Directors:
Richard Billingham
Producers:
Jacqui Davies
Writers:
Richard Billingham
Others:
Jacqui Davies
Aka:
Ray & Liz
Studio:
New Wave Films
Genres:
Drama

Impressively grim and moving without being politically charged. The characters neither lovable or inspiring, yet I felt a deep affection, a need to protect. The film wasn't sentimental in any way. The still lingering shots reminded me of Fassbinder at his finest and the stillness of the acting or none acting up there with the finest of this genre of film making I have ever watched. Best film I have had so far from Cinema Paradiso.

A bleak but beautiful elegy - Ray and Liz review by RJ

Ray has gradually descended into alcoholism since being made redundant. His physical environment has shrunk from a terraced house, to a council flat, to a single room. His emotional environment has diminished too; his two sons are gone (one into adulthood, the other into social care) and his wife, Liz, has left him. Scenes of Ray eking out his lonely existence, subsisting on the 6 litres of home brew which his neighbour delivers to him on a daily basis, frame two memories from days gone by. They are not really Ray's memories, but those of his son, the film's director Richard Billingham - although large parts of these memories concern events that Richard did not directly witness and they are therefore hybrids of memory, imagination and stories told by other involved parties.

In the first part, Ray and Liz take Richard out shopping, leaving Ray's brother Lol, who has learning disabilities, in charge of their two year old son, Jason. Whilst they are out, their young lodger Will, who apparently has psychopathic tendencies, manipulates Lol into becoming paralytically drunk. Will then leaves again, setting everything up to seem that Lol ended up this way by himself - for which he ends up suffering brutally at the hands of Liz. This section is tense and deeply uncomfortable to watch and features a truly brilliant performance from Tony Way as Lol. I had seen him in many things before, usually in small, comedic roles but I had never seen him in anything like this. The innocence and terror that he brings to the character makes the unjust brutality of his punishment so hard to witness.

The second part takes place eight years later and concerns the events leading up to Jason being placed into social care. By this time, Ray and Liz have truly sunken into 'the passivity of poverty' (I'm borrowing this phrase from the Sight and Sound review, which itself takes its cue from Orwell's The Road to Wigan Pier). They are barely even aware of the whereabouts of their young son, who eventually ends up nearly freezing to death after spending a winter night in the shed of a friend's neighbour, having become frightened and/or lost whilst attempting to make his way back home at night. There are some extremely touching scenes as Jason is temporarily taken in by his friend's mother - although not rich, they have many luxuries (and indeed basic necessities such as heating) that his own family do not.

Although undeniably bleak this is also a beautiful, poignant film and not by any means entirely devoid of humour. The cinematography is extraordinary and I was not surprised to find out after watching it that it was shot by Daniel Landin, who similarly found beauty in the unlikeliest of places in Jonathan Glazer's brilliant 'Under the Skin'. Despite the subject matter I would not classify this as being gritty, realist, kitchen-sink drama; the whole film is suffused with the poetry and melancholia of memory, which makes it something else altogether.

I found it fascinating, engaging and moving. Like another reviewer on this site, I will be remembering the name of its director, Richard Billingham - albeit for different reasons.

Anyone who has followed the photographic career of Richard Billingham will love this film based on his early childhood.

Like the photo essays the movie encompasses both comedy and tragedy, building to a stunningly brilliant concluding sequence.

And you don't have to be versed in Billingham's photography, this is a carefully observed drama that stands alongside all the greats of British gritty-realist cimema.

This so-called “film” displays everything that is wrong with modern British cinema. The fact that it’s developed from a 5-minute video artwork piece tells you all you need to know about it. If you’re nevertheless intrigued, just watch the equally abysmal trailer. Based on the artist’s background, it’s a 1980s slice-of-soap set in a Birmingham council flat and worse than any soap you’ll ever see on TV. Sample dialogue: “Pass a fag, Ray”. The “artist” hasn’t a clue about how to make a film. In case he makes another, remember the name: Richard Billingham. Avoid like the plague.