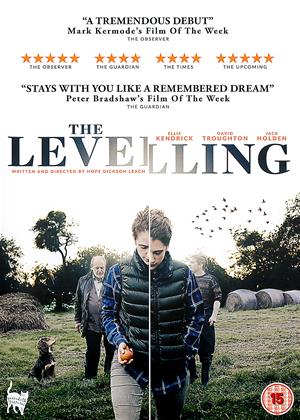 Reviews (6) of The Levelling

Well played yet dour - The Levelling review by JH

A young woman (Kendrick) returns to the family farm after many years, due to tragedy -- her lone brother's apparent suicide -- and grapples with a difficult situation and a combative relationship with her father.

A very British film to me: fine performances from both Kendrick and Troughton both controlled and realistically playing their parts, moody well-shot rural scenes providing some atmosphere to the bleak world: yet also one exhaustively dour, thin on plot, drama.

It's clearly sincere in the portrayal of the realities of modern farming and rural life, which may well be it's main drive alongside the similar-yet-different father\daughter relationship, but this left me cold.

Subtle, with great acting, but frustratingly thin on plot - The Levelling review by BW

The review by JH here echoes many of my sentiments on this film. The Levelling didn't leave me cold. I did find it quite moving actually but there was something lacking here. I get what JH means by a very British film. I watched it on a Mark Kermode recommendation and it's a worthy, British, very Mark Kermode sort of film. Not a cheerful picture by any means. The three lead performances are standout, powerful and moving. There's a gritty, genuine quality to this movie but it was definitely missing something for me. Narrative development is very limited.

A very good British film - The Levelling review by JO

I found the filming extraordinarily intense, up close to the farm and the mud and the hardship, with wonderful performances from Kendrick and Troughton going to the heart of father-daughter relationships, both characters vulnerable yet armoured in their own way, not always to their advantage. The director I think wrote the script, very intelligent writing and direction, and the photography picks up the waterlogged environment illuminating it with occasional moments of joyous landscape.

Not for me - The Levelling review by BE

It appeared to be an okay movie, albeit rather bleak. Quite a way through, I chose not to continue with it due to the intent to slaughter a newly born calf - due to it being a male and not being able to render milk in the future.

A realistic edition of 'Countryfile' no doubt! - The Levelling review by Moonpie

Mesmerising and touching, no doubt the director wanted us to see just how bleak and frustrating life can become down on the farm. I was aware of the high suicide rate amongst our farming community and for once didn't feel the need to utter 'poor bl**dy farmers!'

Yet another predicatable, derivative, pretentious, 'diverse' state-funded British film which bores. - The Levelling review by PV

I've been watching a lot of British films lately - many from 2016 or thereabouts and all utterly uncinematic (they'd be better as TV dramas or even radio plays) and all totally state-funded by BBC films (which our licence fees pay for), the Film council (ditto) and the lottery (funded by poor people's wishful thinking).

As Alan Parker rightly said when commenting on RATCATCHER, this is the kind of film that can only be made with state subsidy coz no-one wants to watch such stuff, except luvvies in film schools. Utterly uncommercial, utterly uncinematic.

Plot is SO predictable - you just KNOW what the old drunk farmer and guns will come together. Lots of cows and an opening scene with near-nakedness (ooooooo Missus!) and a daft splatter shot too to show the director is arty, probably. Yawn.

I didn't believe the main character - a seeming cipher for all female hurt, and two-dimensional in that feminist role.

Some deeply pretentious shots of animals in water add padding to fill out a flimsy story to just over 80 minutes; but really it should be a 40 minute TV drama on PBS or a radio drama. There is NOTHING whatsoever cinematic about this dross, so why waste scarce movie-fund money on it? Time for a cull at BBC Films, the BFI and lottery funding committee methinks.

It's all like The Archers but much MUCH more boring - but hey it's diverse with lots of women making films so it must be good. No, luvvies - talent does not work like that. I cannot help wondering how man really talents white men with decent movie ideas have been kept down to overpromote mediocrities like the ones who made this borefest. No stars.

Watch APOCALYTO to see how movies set in the natural world can be done. You need a plot and tension, and more than a weepy victim feminist character whingeing at how unfair life is, and a 2 dimensional bad father to ram home the point about how useless men are.

If this is the future of British cinema, I suggest putting it out of its misery asap.

Whereas a film like ‘The Witch’ had a gloomy, depressing, and a mystical vibe to it, but still managed to become one of the most poignant supernatural/strange dramas in the last 10 years or so (according to my own axiological values), The Levelling follows its footsteps closely but omits the supernatural/strange part in favor of a more grounded approach about an estranged daughter and her nihilistic yet stoic father. Easily, The Levelling could’ve been ‘The Witch’ if said elements were introduced, but even without those elements of the strangely unexplained but surreal-ly real, the film still feels as if some major force acted upon these characters and drove their actions like a puppeteer its puppet. Finally, this was my long-winded approach of asserting that The Levelling is a surprisingly good film, floating and differentiating itself amidst the mediocre offerings that most other live features aspire to.

The Levelling is directed by first-time writer-director Hope Dickson Leache, and follows a young woman who must confront her past (both figuratively and literally) after a loss of life as occurred back at the family farm. The success of this premise rests hard in the hands of the actors and that couldn’t be different, so finding the proper lead I assume was one of the main concerns of the production team and director of the film. Thankfully, they’ve managed to find the perfect cast for this role, the undoubtedly talented and versatile Ellie Kendrick (Game of Thrones, Love Is Thicker Than Water), who owns this role and I can’t imagine anyone else in her stead now that better I think of it. And so, the plot thickens.

Kendrick portrays a young veterinarian who has no other choice but to return to her old family home after her brother has passed away. There awaits her father Aubrey (David Troughton) who seems like a different man after the accident that he so claims to his son occurred. However, Clover (Elle Kendrick) is not so sure, and she embarks on a self-imposed quest to find out what has really happened to her brother to possibly unravel the half-mystery behind his death.

In hands of a lesser director, this could’ve easily turned into a mellow melodrama without any sense of gravitas and potential real dramatic impact. However, Leache takes over and produces a sort of cathartic experience that many would find hard not to like, but even harder to fully appreciate. In a sense, this could be also said for the unravelling narrative in the film as well.

Finally, The Levelling is a masterfully done film, featuring an engaging story that would keep you glued to your, presumably TV screen, since I reckon most would not bother to see this at their local theaters. Don’t be that “most” and go see/rent this film.