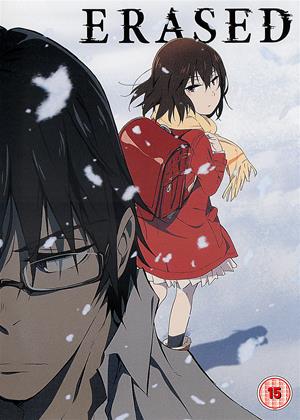 Erased is a wonderful exercise in time-travel storytelling that somehow ends up not messing up its premises with illogical conclusions or dispersing its narrative all over the place. Instead, Erased is a perfectly watchable show which immediately hooks you up with its mystical atmosphere, astounding score, and top-notch animation right from the get-go. Thus, Erased can be summarized as a gripping thriller with dramatic twists and tightly woven mysteries that go beyond the show and bury deep beneath your psyche. OK, that’s probably an exaggeration on my part, but still: Erased is simply good.

When time travel is involved, there are usually two simultaneous plot currents:

In our case, Erased deals with both, since the main character Satoru (voiced by Ben Diskin in the English version) travels back in his past in order to change certain events that led to a not-so-desirable future/present. Thus, Satoru finds himself having an adult-thinking brain inhabited in a ten-year-old child’s body. During which, he ploys complex tactics and strategies to realize his plans as swiftly and effortlessly as possible. This is exactly where the main conflict in the series stems from, and the audience is in it for the ride.

As the episodes go by, it becomes clear that it’s more about Satoru trying to set things right as opposed to time travel, which only serves as a backdrop to explore how an adult would handle a grown-up issue(s) if they had the second chance to do so. That isn’t to say that Erased does not use clever visual trickery to remind us about the time travel shenanigans that constantly occur, but all of this is done in a subtle way as to leave room for the characters to properly develop and realize their true potential as the series (episodes) goes by.

Erased suffers from one slight caveat insofar its storytelling goes: i.e. it’s too short. The majority of the episodes (twelve in total) consist of a structured narration which goes something like this: boy sees problem, boy looks for solutions, boy chases red herrings, eureka, boy solves problem, but wait: another problem grows in the distance. Until next time. The way this structured storytelling is presented leaves little room for mystery in regards to each consecutive show, but a healthy amount of misdirection will keep you guessing regardless.

All things considered, Erased features a quality animation, a decent atmospheric score, and a blend of tightly interwoven mysteries that would keep you interested until its very end. To this extent, Erased is well-worth your time.