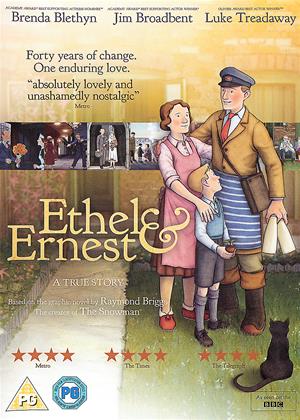 Reviews (2) of Ethel and Ernest

This lively animated film tells the true story of Raymond Brigg's own parents from the day they first meet until their passing, in the same year in 1971.

Along they way they fall in love, marry, buy their lifelong family home and acquire the various trappings of their times, such as a telephone, a car and other more subliminal items which always set the tone of the times.

History too is very much a part of the story. WW11 comes and goes as does the 1945 Atlee Government and their real life son Raymond himself, grows up and shocks his parents by going to art college in the 1950's.

What makes this special is that it could so readily be the parents of many of us and that is also what makes it so moving.

A Gentle Masterpiece - Ethel and Ernest review by AL

This beautiful film tells the story of the life of a very ordinary couple with tenderness and love. It is true to the book and a marvellous animation. A very moving tribute from Raymond Briggs to his parents.

Ethel and Ernest by Roger Mainwood, based on Raymond Briggs’ graphic novel is poignant, uplifting and bittersweet slice of cinema cake that permeates throughout its running time a diligent entry down a memory lane, if you catch my drift. It’s as nostalgic as it is timeless, to a large extent thanks to its wonderful visuals that captivate and enumerate one’s particular synapse nerve to exactly remember, or rather invoke memories from one’s deepest childhood dreams, hopes, desires.

Or, in twelve words or less, Ethel and Ernest will make you sob like a little rascal.

Ethel and Ernest is everything current celebrity cult culture isn’t. It’s neither sarcastic, nor openly blatant; it’s most certainly not excessive in its use of action and/or Baypocalypse. So, what is Ethel and Ernest then?

Well, firs off: Ethel and Ernest is simple yet complex; simple in the sense that it’s done with utter precision as to quite accurately resemble real life with all its lumps and valleys. But complex as in not knowing what will the future hold; Ethel and Ernest, although depicting author Briggs’ parents’ life in its entirety, is also unpredictable and sad, as in bloody sobbing sad.

The plot follows the voices of Jim Broadbent as Ernest Briggs, Brenda Blethyn playing Ethel Briggs and Luke Treadaway who vocals Raymond Briggs himself, in London 1928. Ernest is a milkman eyeing the 5-year older Ethel who lends her maid services at one wealthy household. Now, Ernest is mesmerized by her beauty and approaches her likes by offering flowers.

Needless to say, they quickly fall for each other and decide to marry afterwards.

Then, after all is said and done, we witness the preceding events that amount to WWII that are handled with such care in what becomes the best rendition of the whole feature. And so, Ernest and Ethel’s ideologies start clashing as their opposing views rupture inward and cause a slight hiccup in their marriage. He believes in the power of labor, while she thinks blue blood best serves the country by a large stretch of a margin. They are the exact opposites, still their loves continues to blossom in the continuing bloodiest years humanity has ever seen.

Eventually, as we progress deeper and venture further into their lives, the ordeal starts divulging into episodic territory, which is not bad per se, but jumps out from our previous established hierarchy of structure, needs and characters motivation.

But the animation, which is borderline, if not just GENIUS, makes up for other parts where Ethel and Ernest stumbles (and there are few). And let’s be honest to ourselves: the people who don’t like nice, animated, hand-drawn figures that imitate life have no taste in art – just to clarify.

Ethel and Ernest is amazing.