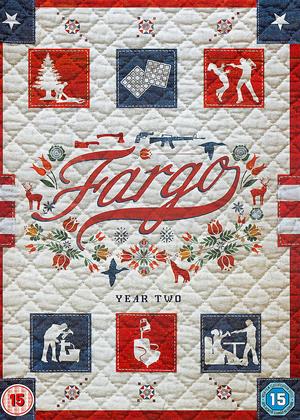 For the second season of Fargo, there’s a lot of weight on its shoulders. With the first season, it was astounding to watch the quirky midwestern world crafted by the Coen Brothers come back to life in a fitting neo-noir saga of black comedy. It had the benefit of attaching big names and a strong crew behind the scenes who understood the darkness, the warmth, and somber serenity of crime lurking in Minnesota. There was a lot of stress to see how this second season would fair, especially for being an anthology series of contained seasons. And it thankfully soars to even higher heights than the previous season.

The second season manages to avoid easy comparison by not just featuring a new cast, but a new era. Set in 1979, this story follows a couple who end up killing someone. The couple of hairdresser Peggy Blumquist (Kirsten Dunst) and butcher Ed Blumquist (Jesse Plemons) try to hide the body and soon find themselves ending up with money and a whole lot of trouble. That trouble attracts intimidating figures such as the smirking crime boss Mike Milligan (Bokeem Woodbine). Seeking answers and trying to bring justice to this fiasco of missing bodies and money is devoted State Trooper Lou Solverson (Patrick Wilson) along with his father-in-law of a sheriff Hank Larsson (Ted Danson).

Season 2 of Fargo goes a little bolder in the bewilderment department by taking greater risks with its storytelling. As an example, a subplot involves the possibility of aliens maybe/kinda being a thing. At first, we may believe it is a hallucination, but other times a UFO seems to break a scene and cause an unexplainable event. How do we rationalize their presence? The truth is we sometimes can’t. The whole premise of Fargo revolves around wild crimes and events that seem unlikely or odd. We have the benefit of seeing every perspective to know the truth about the murders, the mafia ties, the money at play, and the characters with their quirks. But then comes the possibility of aliens and we have that luxury stripped from us. We’re just as confused and unsure of the characters, not knowing how to explain what we’ve seen.

The more grounded elements are still stellar, with the ensemble cast delivering some of the series high points. Nick Offerman plays a quirky fellow around town who drops in and out for some cantankerous observations, even occupying most of one episode. Plemons melds perfectly into that role of a man unsure of morality and a bit wide-eyed when it comes to serious matters of crime and revenge. And, wow, Dunst absorbs that 1970s Midwest vibe for dinner with the hair, the sweaters, and that shrewd nature that came with the rise of second-wave feminism. Everyone is in top form that it’s tough to get to them all in this review. I’ll just state that Woodbine is the perfect kind of villain with a smile that can send chills.

Fargo Season 2 not only manages to be a stellar thriller in its own box but plays beautifully with how it ties in as a prequel to the events of both season one and the film. We see shades of what would form in the future with younger characters who would later become misfits and noting an end of an era for certain figures. Perhaps the most exceptional moment is in the finale where the central villain makes it out alive and lives to see another decade. The only catch is that is means an office job within an interior that is shaped exactly like a prison cell. A punishment that is most off-putting for such a surreally intoxicating show.