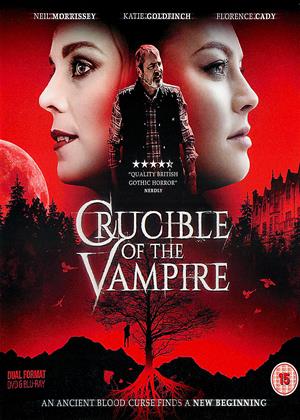 Synopsis:
Isabelle (Katie Goldfinch), a young university researcher, is sent to a country manor house in rural Shropshire to verify an ancient artifact that a family has uncovered during the renovation of their home. However, the artifact has a cursed history and it soon becomes apparent that the house holds a dark secret. While Isabelle sets to work verifying the object she becomes the obsession of the owner's dangerous daughter, Scarlet (Florence Cady), and they develop a strange sexual attraction.
A chance finding of a 200 year old journal confirms Isabelle's suspicions that die family are not the only residents of the house and that there is something much darker lurking within its foreboding walls. Uncovering the truth, she finds herself trapped in the clutches of the house's malevolent occupants.
Actors:
Babette Barat, Florence Cady, Angela Carter, Brian Croucher, Katie Goldfinch, Phil Hemming, Aaron Jeffcoate, Darren Lake, Graham Langhorne, Lisa Martin, Michael Molcher, Neil Morrissey, Charles O'Neill, Richard Oliver, Larry Rew, David Rowlinson, Peter Rowlinson, John Stirling, Jeremy Taylor
Directors:
Iain Ross-McNamee
Producers:
Amanda Murray
Writers:
Darren Lake, Iain Ross-McNamee, John Wolskel
Studio:
Screenbound Pictures
Genres:
British Films, Horror, Thrillers
Countries:
UK

Reviews (6) of Crucible of the Vampire

Ambitious story-telling on a small budget. - Crucible of the Vampire review by NP

Director Iain Ross-McNamee makes very good use of what is clearly a small budget, for this UK horror story. Veteran actors Brian Croucher (Doctor Who, Blake’s 7 and EastEnders) and Neil Morrissey (Boon, Men Behaving Badly) feature alongside newer names to give a good variety of ages and acting.

Special effects are used with great restraint, and when they do occur, are pretty impressive. The locations, and the vampiric atmospherics they bring about due to fine cinematography, are more immersive than the story being told, however. Rather than a traditional ‘Wicker Man’-style tale of mysterious locals and cavorting sects, I think a weirder, more personal story would have benefitted from McNamee’s talents. There is a certain Jean Rollin-esque style to some of the latter scenes and the way they are composed. Rather than embracing a style of film that has been told more expensively elsewhere, a more dream-like narrative would have been more suitable. There are several nods in that direction, with a certain erotic charge involving the excellent Katie Goldfinch (as Isabelle) and Florence Cady (Scarlet) and some fine locations (beautifully lit) with a dark fairy-tale quality. A little more of this and this enjoyable 96 minutes might well have been even more absorbing.

Like a Car crash you can't look away from! - Crucible of the Vampire review by TA

I had high hopes for this film, British Horror is usually very good, however this is like some kind of comedy parodying bad acting, I wanted to turn if off after 5 mins but it was like some gruesome car accident I couldn't look away from and I had to carry on watching just to see if it was actually that bad, to save you the time, Yes, yes it was.

On the upside the investors shouldn't lose much with the £375 budget they used to make the film.

Absolutely terrible - Crucible of the Vampire review by GBK

This is a movie that you do not want to waste your time on, The acting is terrible, The quality and story is awful and must have had an extremly limited budget, Very surprised that Neil Morrisey was involved in this as i thought he was a lot better than this film was but even his performance was poor

A modern take on the Hammer genre. - Crucible of the Vampire review by PM

A modern film; perhaps a nod towards the Hammer classics, nostalgic, with greater subtlety and some wonderful photography.

OK, it was made on a budget, some of the acting at the start lacked the polish of major productions but may be this adds to the charm. The Shropshire setting is fantastic and atmospheric, it was shot in real places. Both of the female leads carry the film well and hopefully we will see them in the future, they are a match for Hollywood.

An intriguing story line, with plausible links to uk history and folklore, the pace develops with plenty of, "It's behind you" moments. The climax is not too enigmatic, but also prods your imagination.

This film is a great piece of escapism for a dark and stormy autumnal night. Suspend your scepticism, get your log fire lit, crack open a bottle of port and be entertained.

Rubbish - Crucible of the Vampire review by NW

Jeez .... speechless ??, just don’t bother ! Just doesn’t work, story could’ve worked I guess but seriously lacked everything that makes a film enjoyable ... uurrggghh. The only good thing about this film was the house it was filmed in !!! Was surprised to see Neil Morrissey in it to be honest... Dunno how they managed that one ... anyhoo , I’m really Struggling  to end this as it have to be 100 characters, hopefully this bit will have made them up