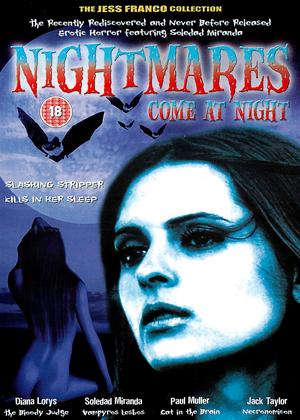 Reviews (1) of Nightmares Come at Night

Susan Korda, or Soledad Miranda as she is better known, plays the air-headed girlfriend of ‘the neighbour’ in very brief scenes that don’t do her justice. Diana Lorys plays Anna de Istria, who is being driven out of her mind, or so it seems. Her friend Cynthia (Colette Giacobine) may or may not have something to do with this. The always brilliant Paul Muller plays Dr. Lucas, again pretty under-used. As the story goes, that is pretty much it – not that intricate plot contrivances usually bothered Franco too much.

The rest is much as expected – a fine, jazzy musical soundtrack, lots of swooping cameras and ‘deliberately’ blurred scenes, extravagantly made-up women and shifty men. It doesn’t, however, add anything new, horrific, or particularly interesting and so the attention tends to drift more than once before some answers are finally revealed at the end.

Perfunctory by Jess Franco’s standards. Not unenjoyable, but not very engaging either.