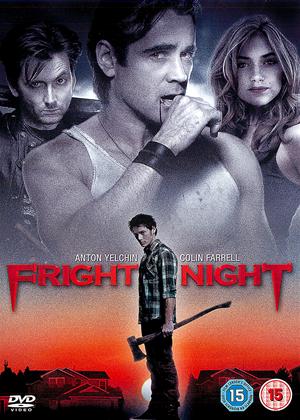 im not the vampire type film watcher, but as this had colin farrell in it it was a must see!. i loved it, gory but in a good way(if possible), couple of light moments overall a good film. would thoroughly recommend :)

This year’s remake of the 1985 vampire movie Fright Night sees Star Trek star Anton Yelchin as Charlie a teenage boy who is minding his own business when Colin Farrell moves in next door and starts killing people.

Expectations for the movie were fairly low, as the horror remake has become somewhat of a cliché, and at first the film does not disappoint. For the first quarter of the movie director Craig Gillespie seems determined to prove these expectations wrong, without much luck. The film walks the precarious line between too serious and ridiculous and unfortunately leans dangerous toward the former. The movie follows the typical horror movie direction including missing friends and a lone boy charged with protecting the beautiful women in his life.

Unlike Farrell’s somewhat hammy performance however, the movie creeps up on you and before you know it you’re really enjoying yourself. There is very little time devoted to story set up in the movie and this works in the movie’s favour in the end, rather than continuing it’s attempt to sell you the serious vampire movie Fright Night throws itself head first into the action and all of a sudden what was set to be a dull a predictable 100 minutes sparkles into a fun and colourful horror movie.

The appearance of a foul mouthed and drunk David Tennant helps immensely, as his character brings a sense of tongue-in-cheek sarcasm to the movie. Whilst Yelchin’s performance absolutely shines and the small role played by Superbad’s McLovin’ (Christopher Mintz-Plasse) is surprisingly cliché.

Far from being the best vampire film of the film misses a bit of a trick with its lack of humour, which is kept very close to the chest through out, allowing only a handful of giggles when Tennant is on screen, but overall it is actually a tremendously enjoyable watch.