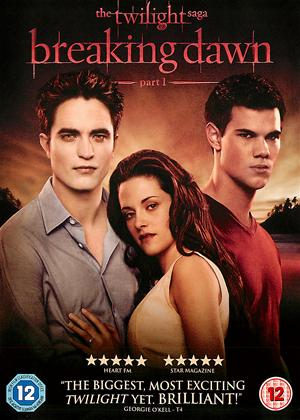 Rent other films like The Twilight Saga: Breaking Dawn: Part 1

This is it. What all the Twilighters are waiting for. The vampire Edward Cullen (Robert Pattinson) and human Bella Swan (Kristen Stewart) are getting married! *squee*

‘The Twilight Saga: Breaking Dawn Part 1’ is the most anticipated of all Twilight movies because of many things: One, Bella’s wedding dress. Before filming this installment even began, fashion designers were already tapped to imagine what Bella would be wearing on her big day. The winner is revealed in ‘Breaking Dawn Part 1’ and the honor – and trivia question – goes to designer Carolina Herrera. That’s the first big reveal.

Second anticipated scene in ‘Breaking Dawn Part 1’? Edward and Bella on their honeymoon. Fans await Edward going berserk after having been a virgin for close to two centuries, his unexpected breaking of their marital bed, him biting on the pillows. Oh yeah, Bella gets pregnant with a half-human, half-vampire baby, and Jacob (Taylor Lautner) and his wolf pack are miffed because guess what, Bella’s fetus is threatening her life. So: save the baby, end Bella’s life. And this is just a few weeks into Edward and Bella’s marriage. Wait, this is a PG-13 movie, right?!

You can’t fault Stephenie Meyer for writing what are really Harlequin romances for young adults. Nothing’s wrong with that. For a series of novels-turned-movies to cater to girls and women’s emotions is an incredible feat. Twilight has disturbed the force: fanboys of comic book and sci-fi heroes despise the fangirls that it has created. They look down upon it as nothing but hysteria and not simple geeking-out. Well, fanboys, tough! Not everything’s about you.

‘Breaking Dawn Part 1’ (Part 2 comes later this year) is directed by Academy Award winner Bill Condon (‘Dreamgirls’) and like the directors before him, he did his best to make something out of a flimsy plot. Condon captures the nuances of true love and newly-wed bliss that you be heart-warmed. The action sequences? Let’s say it’s not Condon’s forte. But you must applaud him for filming one of the goriest birth scenes. Finally, Twilight becomes a horror picture.