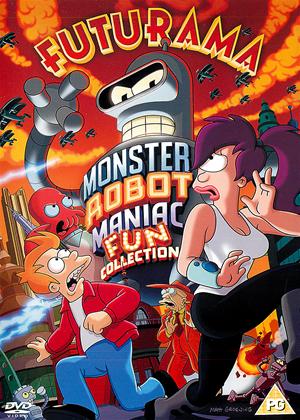 Synopsis:
Set in New York City in the year 3000, it's a future unlike anything you've ever imagined... unless you've imagined booze-powered robots, semi-literate lobsters, and horrifying yet sexy cyclopses. Someday all comedies will be this funny... but you'll be dead!

Futurama is one of those series that is hard to really form a collection of episodes around. It has some Christmas episodes but not nearly enough for a complete set. It has some Halloween-style episodes but you really have to squint and turn your head for them to look as such. So what type of collection could be formed around this sci-fi satire? Well, for the title of Monster Robot Maniac fun collection just seems like a random assortment of episodes. After all, robots and monsters are a part of the main cast and come about in any episode. It’s enough to make me wonder why the title of the collection wasn’t just a random string of words.

So what episodes are present? Well, we have the season one episode “Hell is Other Robots”, where Bender finds drugs, finds religion, breaks its tenants, and goes to robot hell. The episode is notable for focusing on Bender’s immorality and showcasing Dan Castellaneta in his most eccentric role as the Robot Devil. This episode is also quite musical for not only feature The Beastie Boys as a musical guest but also featuring one of the most toe-tapping by numbers the Robot Devil explaining why Bender ended up in hell. So we have robots covered.

Next up is “Anthology of Interest I” from season two. In this random anthology, Bender becomes a giant, Leela murders everyone in the office, and Fry learns what his life would be like if he never came to the future. In terms of relating to the title of the set, the only noteworthy entry is Bender becoming a giant. The best entry is by far Fry’s story for featuring a hugely geeky cameo ensemble of Gary Gygax, Al Gore, Nichelle Nichols, and Stephen Hawking (“I call it a Hawking hole.”). What’s surprising is that the set doesn’t include “Anthology of Interest II”, considering that features another robot-centric story with Bender becoming human.

But it becomes clear that this set is more of just a sampling of one episode a season since the next episode is Season 3’s “Roswell That Ends Well.” This is a time travel episode where the crew are flung into the past and have to escape Area 51. At the same time, Fry meets his grandfather and ends up altering history. Not much is done to change this, however, as Fry ultimately becomes his own grandfather and Professor Farnsworth’s reaction to all of this is to simply say “Screw history!”

Finally, there’s Season 4’s “The Sting”, a fairly cerebral episode that showcases a more emotional arc of exploring what would happen if one character died. Fry is seen being killed by a giant bee while the Planet Express crew collects honey from a giant space colony. Leela struggles to come to terms with his death while ingesting special honey that causes her to hallucinate Fry and dip further into a dreamlike state. While the episode does snap that tension with a status quo-style ending, it does provide more of that sincere heart between Fry and Leela while also treating death in a very real manner of grief, something that would become severally lax in future episodes.

As a sampler, this set is decent. Each episode stands well enough on its own that you don’t need to be as up on all the seasons to grasp the stories. However, as with a lot of collections, it just can’t do justice to investing your time in full-season sets.