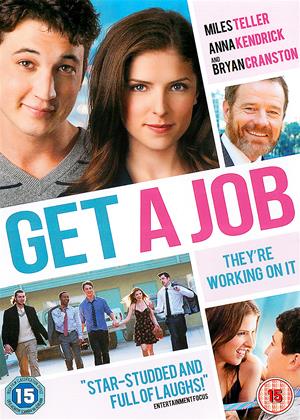 Reviews of Get a Job

Get a Job review by Mark McPherson - Cinema Paradiso

The job market is tough for a college graduate. With for-profit schools suckering the youth into pointless degrees and the requirements rising for mere intern positions, it can be a frustrating struggle to find your place in the American workforce. I can’t even imagine how much of a strain on the psyche such a fight would be for today’s youth that find themselves low on morale and hope. It’s a subject that would make for a great story and maybe even a dark comedy. Get a Job could have been that movie if it were not a cartoon.

This is a movie that exists in the strange realm defined by the one-dimensional world view of National Lampoon. In this world, every employer is either a doddering old pervert, a pompously corrupt snob or a drug-fueled alternative boss. Every college grad is a creature that spends all their spare time gaming and smoking weed. Every middle aged parent is a technologically-illiterate boob that misinterprets Twitter. It’s about as cartoonishly disassociated from reality as I feared, harping more on easy and tired gags of workplace sexual harassment hi-jinks and abundance of drug use.

Miles Teller plays Will Davis, an average and straight graduate with gumption and determination to land a job. He has some skills with video editing that feel wasted in how he is reduced to editing dry corporate interviews. On paper, this appears to be a solid premise that can mirror the draining reality of reigning in your talents for jobs that pay. It’s too bad none of that relatable struggle is present in his cartoonish workplace of exaggerated characters. An elderly executive isn’t just some coot that can’t comprehend technology; he has to be a closeted pervert. A strict boss can’t just be a strict boss; she has to also be a closeted pervert. A young boss can’t just be creative and calculative; he has to be the biggest pervert of them all. The only character who doesn’t seem to be a pervert is the sagely janitor and that’s only because his thing is stalking people, muttering as though he were a Native American and dealing drugs.

I would feel something for the plight of Teller’s character, but he seems so passive and manipulative throughout this picture. Why would you willingly take drugs to stay up late to finish work at the request of your employer? I know times are tough, but any kid stupid enough to go that far for a job deserves the spit his co-workers shower him with. By the time he realizes how terrible it is to work for terrible people, he already has his corny revenge plans in place before he leaves the company.

Perhaps I’m looking too deep into what is essentially a social satirical farce. But effective satire still requires some knowledge and intelligence of what you seek to mock. Get a Job has all the comedic understandings of a 60-year-old hermit attempting to write about people in their 20’s. While attempting to insert a modern angle of technology, the movie displays how dated it is with its juvenile humor and half-hearted attempt at understanding youth culture. Recent college grads may have some great skills to go places in life, but they’re still preoccupied with building bongs and playing video games to absurd degrees. Would grads struggling to find a job really be that invested in using a large amount of tubing to create a massive bong? Maybe I just have more faith in today’s culture, but that seems very off.

The movie does carry one decent message. A grad is working as a school teacher and is angered by his lackluster gym team winning participation trophies. He explains to them how trophies don’t mean anything if you don’t work hard to earn them. The kids then become inspired to refuse the trophies and work harder to win one in the future from their strength and determination. If only the writing of this picture practiced what it preached by actually working harder to be the career-seeking comedy it wanted to be. As it stands, Get a Job comes off more as the incoherent ramblings of an elder who has a low opinion of society and a frothing mouth of going-nowhere rants.