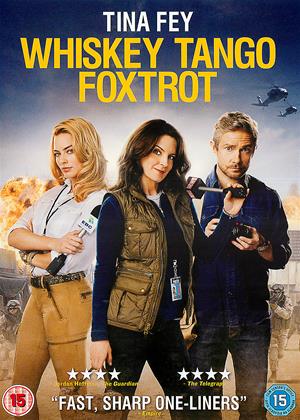 For a satiric take on the absurdity of war, Whiskey Tango Foxtrot is nowhere near as funny and subversive as it thinks it is. For an action-packed piece, its protagonists are devoid of all real danger real war is happened to hold. For an American propaganda piece to further fuel up the public opinion in regards to occupying countries to take their resources, it succeeds on all levels.

Whiskey Tango Foxtrot’s not so subtle title abbreviation WTF tries to sympathize with both sides of the war spectrum – the aggressor and the victim. Or, to further my point: its absurdity doesn’t coincide with the absurdity of modern warfare - rather it downplays the chaos and destruction caused by war to elicit cheap laughs from the audience.

And the presupposed audience is not supposed to be smart, critical, or residing outside of the USA borders.

Lead actress Tina Fey portrays the usual narrative trope: a single woman journalist whose naivety puts her in dangerous settings from which there is no way out. Miraculously, her clumsiness is what ultimately saves her, thus the absurdity of it all.

However, as she learns her way through the Afghan camp, she grows tougher and transforms into an adrenaline junkie always craving for more action. Never mind the dangers her crew suffers due to her inexperience: Tina Fey is here to stay.

Then, we’re witnessing a glorification of promiscuity that’s taking place in the ‘Kabubble’ camp, where excessive drinking, partying and the occasional snuffle under bed sheets is seen as not god, but rather morally neutral. In continuation, Tina’s told that her feminine charms are multiplied in the war area as opposed to what she may looked like back home.

Then, your typical Hollywood story unravels: girl falls in love (her love interest is played by Martin Freeman), embarks on a journey, saves the day despite all odds and defeats the evil Afghan overlord once and for all.

Look: war is not a movie niche. It never was, it never can be. War is only funny in the grand scheme of things, the epistemological conundrum that engulfs the world and every living being residing in it: does anything have a point? In that regard, you could argue that its sole meaningless is entertaining to think about, but Whiskey Tango Foxtrot steers clear of such deeper discussions by throwing in slapstick hilariousness that’s light years away from the quality of, say, Four Lions’ subtle take on modern-day terrorism.

It’s not smart black comedy, it certainly doesn’t have an overall serious message to go along with all that silliness, but it probably confirms a deep-rooted maxim: “war, war can (occasionally) change.”