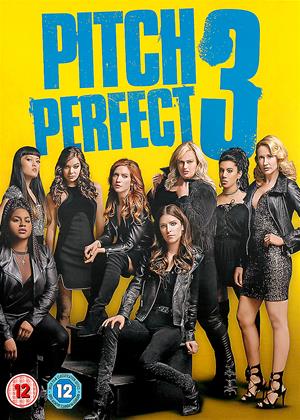 I have loved all of the Pitch Perfect movies, this is no different. maybe could have done with a bit more on stage act and less kidnapping but otherwise it was fun and Fat Amy came to the rescue ! Well worth a laugh of an evening .

Same as previous instalments but still fun and good light entertainment , this time with a bit of action thrown in ! Worth a watch if you like a sing a long

There’s a somewhat sad commentary layered underneath the excuse to gather back the singing group of the Bellas for one more competition. The second film ended with them graduating from college and stepping out into the world with great aspirations. Now those aspirations are dashed when they all end up with terrible jobs. Oh, and their relationships are doomed as well, including one of the women being pregnant with a mystery daddy. Wow, tough times. Maybe another goofy round of overblown singing amid a tepid adventure will liven up their depressing lives. And while it does put a spring in their steps, Pitch Perfect 3 ultimately displays that the saga is growing hoarse.

Their reunion finds them gathering back to sing for a USO show. All the regulars are back. Anna Kendrick returns as the lead Bella of Beca, having recently broken up with her boyfriend. No matter. There’s a new hunk she discovers on the tour and they bond rather well amid her love and knowledge of audio engineering equipment. Still, I must admit how neat and unorthodox it is to see one of the few members of the Bellas displaying a keen passion of audio equipment, lavishing over the piece of tech like a piano she can bust out an amazing tune with.

I just wish the other characters had more interesting plots passed their simple quirks. The B-plot of Fat Amy (Rebel Wilson) reconnecting with her dad is merely a tiresome mob story of daddy doing bad by her daughter. Her father is played by John Lithgow in yet another wasted role of this veteran actor who really needs a meatier role in his older age. His involvement crosses over with the singing competition rivals of Evermoist, led by the female villain delight Ruby Rose. While she does an ample job playing up her rivalry straight, again, it’s more wasted potential from strong actors. By comically competitive movie law, she must wear all black, scowl, and come up with a ridiculous scheme to sabotage the Bellas in a manner where it seems college never left these women or their rivals.

The singing is about as standard as it ever was. Performances by the Bellas and their competitors are big, flashy, and come with a glee ripped straight from a club scene. Lights, sparkles, and bold outfits all come as part of the Pitch Perfect package. But there’s nothing to astound this time around, where even the tacked on comical commentators of John Michael Higgins and Elizabeth Banks are so desperate in trying to add something to a very unneeded sequel.

Pitch Perfect 3 really showcases more than anything how this saga should have met its end one movie ago. Now it pushes on with the same chugging and worn nature as the franchises of Revenge of the Nerds and American Pie, desperate to find an excuse to regroup and replay the same old bit. There’s a telling moment when the women come to the realization that even when they try to break out of the ordinary they’re still stuck in the loop of doing the same thing they’ve done since college. Perhaps this type of film should’ve waited another decade when the Bellas truly found themselves desperate to hit the stage one more time. Because if life seems to peak this early to cling back to the past of singing and dancing, there’s a far sadder story present than just a one-off joke about how childish this repetition has become.