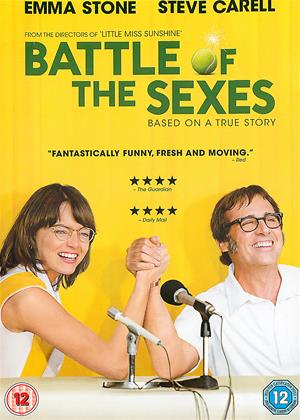 Reviews (5) of Battle of the Sexes

Entertaining and far-sighted - Battle of the Sexes review by JR

I was expecting a comedy, which it is not, although many of the outrageously sexist things the male characters say seem now to be post feminist irony. It is entertaining, and skips along although over 2 hours long. Steve Carrell as Bobby Riggs is a man who likes to make people laugh by clowning around, and plays up to the male chauvanist pig thing shamelessly in order to make more money on betting on the game. But he is also a pathetically needy and seems to have never been able to leave his childhood behind. The film is concerned with civil rights and as it progresses, becomes more weighty and far-sighted. The parallels with Trump and Clinton are obvious. Stone is convincing as BJ, although the film seems hagiographic; and despite being under huge personal (she discovers her real sexual orientation) and professional pressure as well as being the saviour of women tennis players and women in general, she remains even tempered and civil to the monstrous Riggs.

Great soundtrack from the seventies, and colourful, cringe-worthily accurate fashions.

Entertaining modern history - Battle of the Sexes review by Champ

I'm now old enough to be watching historical films about events that I actually lived through! But I was a boy when these events happened, and didn't fully realise the terrible treatment that women athletes suffered at the time. The acting, especially from Emma Stone, as Billie Jean King, and Steve Carrel, as Bobby Riggs, is exceptional, and all the supporting cast are very good too. Even if you don't know the story, it's clear how it's going to pan out, but despite that, it kept my attention to the end.

I thoroughly enjoyed this film - the era was brilliantly evoked, for better and worse, and it does show how far we have moved towards gender equality, even though it's been a very slow journey - the films events took place in 1973, and Wimbledon finally paid equal prize money to men and women in 2007.

Why was this made? - Battle of the Sexes review by EJ

You really need to be so interested in this event from not too long ago to find this movie interesting. Even then, you might question why it was made into this boring movie. It was so hard to watch, I had my finger on the forward button a lot of the time and didn’t miss any of the plot. Yet another dvd I wish I hadn’t rented from Cinema Paradiso: Get some decent movies in your library!

I have been a tennis fan for many years. In the UK this event caused less of a news story than it did in the States. But it was the dawning of an era where Women were making themselves heard and men were sitting back wondering what was for tea. A bit like today's puzzling sexual identifying and multiple sexual identity. It seemed all a bit of a mystery to those of us brought up in a different era. Nowadays equal pay in the work place seems still to be a problem. But I was being paid the same as my female colleagues when I started work around this time. Although in tennis the irony of men playing longer matches and the argument that they therefore deserve more money is tempered with the game needing to be shortened for tv and a younger audience.

The film is very good at taking us back seamlessly to those 70s days where things were different. They even changed the modern film logo introduction to throw us back to the day. The acting is not over the top as I had feared but well done and may be an eye opener to those that were unaware of the story. All in all a much better then expected piece of entertaining social history. I have seen Billie Jean King play live and was aware of her battles. The film is informative, entertaining and fun. Not a bad evenings viewing.

A film that easily could have been 90 minutes. Good acting by both Carrell (Riggs) and Stone (King) but the whole tale is rather tedious other than the last 15 minutes when they do battle on court in the Battle of the sexes but not sure really what the film was about? equality? sexual orientation? or just women's rights. Any way it's not the most outstanding sporting event of the last century not even in tennis and I can't really remember it being that outstanding an event in the 70's...maybe the film Borg v McEnroe will be a bit more entertaining. Just a film that goes with today's times...

Battle of the Sexes review by Mark McPherson - Cinema Paradiso

Indeed, the legendary tennis match between Bobby Riggs and Billie Jean King was a Battle of the Sexes. Namely, a fight to prove that women could not only compete in the big leagues of tennis but triumph over the old guard of sexist and flawed male players. It’s just a bit of a shame that the story more as David and Goliath turn into little more than the expected movie about feeling good with how far women have come with the artificial sweetener of drama, passion, and courage.

There’s little doubt that the strongest component is the starring duo, both fitting the 1970s era well with their thick glasses, curly hair, and toothy grins. Emma Stone plays Billie Jean King as a young and plucky player, struggling to maintain that cheerful approach when the tennis league wants to pay them less and kick them out if they say otherwise. Figuring to quit instead of be fired, she goes about assembling her own female tennis organization, with the help of her more biting friend (Sarah Silverman) that can easily handle tough negotiations. Her road to independence isn’t easy, taking her on the road with long nights away from her husband and many practice sessions.

Her rising career contrasts with that of Bobby Riggs, played by Steve Carell, on the downward slope of his fame. He spends more time betting, partying and popping pills than genuinely practicing or spending time with his family. It doesn’t take a genius to see the route he is headed for. In fact, you can almost set your watch to when he’ll lose his wife and kid and when he’ll lose the epic showdown between him and King.

The film proceeds more by design than by peering into the deeper nooks of this story. We don’t get to know too much about the key players past the rather light interpretations, never too fearful with King and never too slanderous with Riggs. We’re meant to watch Riggs fall, but in an odd manner where you’re not sure whether to laugh, feel pity, or root for his failure. A human approach, perhaps, but still very distant. And while King doesn’t ever fully embody a major sense of weight on her shoulders, Stone brings out some of that passion in the more tender scenes of her affair Marilyn Barnett (Andrea Riseborough). The questioning of her sexuality in these very intimate scenes are so effective I wished the whole movie was about their relationship, which it seems like it could have been considering the film’s blunt end message about homosexuality’s long road to acceptance.

Aside from the fantastic performances, Battle of the Sexes is a rather mild picture of what could have been a film with real teeth for the material rather than a light affair fit for clapping the theater when the epilogue texts fade in. The tennis scenes are decent, the story itself is decent, even the style of the era is decently faithful. But a title as bold of Battle of the Sexes feels as though it should be much more than a pleasant skirmish of athletic forces with a hollow sense of theatrics for the big match.