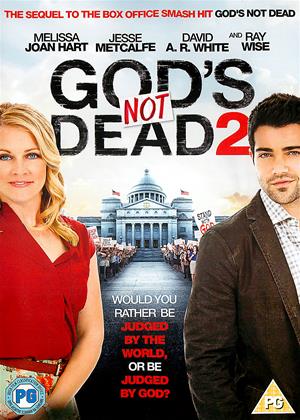 Reviews of God's Not Dead 2

God’s Not Dead 2 is a religious movie, but not in the same sense as The Passion of the Christ, The Last Temptation of Christ or The Mission. Those movies actually explored Christianity whereas this sequel to the 2014 surprise hit is fluff. Pure Flix Entertainment is leading the new wave of Christsploitation, a genre of film in which paranoid Christians pacify themselves to ensure they’re still righteous and all Atheists are sinister villains out to squash their faith. Do not confuse their latest effort with being about persecution as this is the most first-world of Christian problems, exaggerated to be an overly dramatic courtroom drama.

This isn’t so much a continuing story as it is a continuing theme. The world of God’s Not Dead is one where a mean Atheist that wants to destroy Christianity confronts all the plucky Christians. Not prevent it from creeping into classrooms, but obliterate the religion from the American public schools and beyond. It’s most laughable when the movie presents its antagonist of an ACLU lawyer (played by Ray Wise who coincidentally played Satan on the TV series Reaper) smugly utters to his clients that he will prove god is truly dead.

He is serving as the prosecution for a case in which teacher Grace (Melissa Joan Hart) states Bible scripture in her high school history class when asked a question by a student about Jesus Christ. The board catches wind of this classroom exchange and wants her to apologize for bringing more religion than necessary into a classroom discussion. But Grace is a hardcore Christian and refuses to say she is sorry for what she believes in, even if that’s technically not what they wanted her to apologize for. The matter goes to a court and before you know it the movie now turns into a debate of Christianity, even if it was stated at the beginning of this trial that this is not what would be debated.

As with the first movie, there are many subplots about Christianity in the same town surrounding the case. There’s a repeat story of someone from a different race desiring to be Christian, but despised by their parents for such a choice. The only difference is that instead of a Muslim student, this time it’s a Chinese student. The boy confesses he’s a Christian and his dad smacks him across the face. There’s some actual drama here and an interesting dynamic about spiritual belief versus loyalty to family. It’s too interesting, in fact, that the movie quickly whips away to less engaging subplots. A reporter recovers from cancer with the help of prayer. The returning pastor Dave starts to realize he can’t be so goofy as he must choose a side in this culture war against Christianity. A student finds faith when her soldier brother dies and leaves behind scripture. The Christian rock band Newsboys plays in the background as the movie’s musical guest.

The courtroom plot continues on with questioning and padding, ratcheting up the paranoia of good (Christians) versus evil (Atheists). There is one interesting moment as when real-life detective and author J. Warner Wallace talks about the forensics of the gospels. His talk is so unique and compelling that it made me question why he’s in this farce of cartoonish characters. The only other characters that are not sugared-up Christian or an acid-spitting Atheist is Grace’s non-believer lawyer (Jesse Metcalfe) that believes in his client and the judge (Ernie Hudson) who holds some amount of authority and reason during the trial.

God’s Not Dead 2 ultimately leads to another victory for the religious, where Christians win the case to state scripture in public high schools. All of those “free thinkers” that opposed this decision will just have to live with it I suppose, as they’re never addressed in the happy ending of a Newsboys concert. One key difference is that unlike the first God’s Not Dead, the Atheists in this movie are not closeted Christians that only recant on their deathbed. In this movie, they’re just mustache-twirling villains. If the movie didn’t already appear manipulative enough, the end credits urge the audience to text out to all their friends and family “God is Not Dead”. But the last movie asked the exact same thing. Can’t they find a new phrase? How about God’s Still Not Dead? Wait, why wasn’t that the title? And why is this movie still mentioning Duck Dynasty as if it’s God’s gift to television?